Grayscale render for ol' Thor.  Again a mix of paths and selections, and freehand sketching and blocking, to build out the render.
Posted by Ken Christiansen at 8:23 AM No comments: 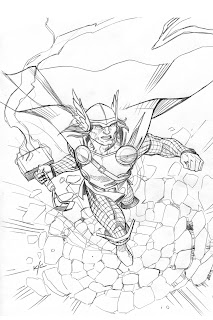 The pencil sketch for a couple different approaches going to be taken with this subject...it's a bumpy ride.
Posted by Ken Christiansen at 8:17 AM No comments:

Destro and the Baroness 03 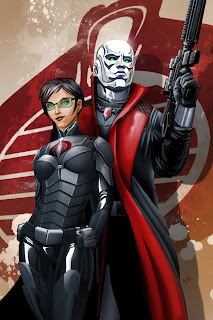 I'm pleased with the main goals of this image, the chrome and armor technique development.  The secondary goal of getting better at organic stuff is just ok...still needs some work to get a more natural feel, distancing itself from the other aspects of the image, but still remaining stylistically coherent.

Baby steps, but overall this one came out pretty cool, I think.
Posted by Ken Christiansen at 8:10 AM 1 comment:

Destro and the Baroness 02 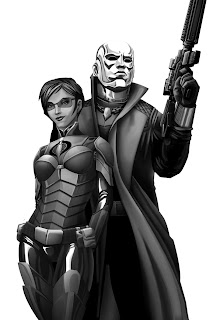 This time I did the armor as a whole piece, and used the line art to make the segments.  It's how I do cars, and ridiculous that I haven't used the theory on armors yet.  Chromed up Destro's bonnet as well...pretty happy that I got a good metallic look, but kept the main features from the 80's cartoon model.

All right, on to the colors.
Posted by Ken Christiansen at 9:20 AM No comments:

Destro and the Baroness 01 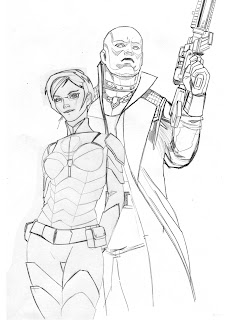 I don't nearly do enough GI Joe, personally and professionally, I think.  I have tons of figures and vehicles from the last few years, the 25th anniversary line really pulled me back in.  Anybody seen the upcoming revamped Sky Striker?  So I decided to finally delve into the property on my own, after doing a very little bit of work on it for Hasbro from time to time.

Two things I wanted to address with this one, chrome, and explore a new rendering technique for armor.  A lot of my armors come out a little disjointed, because I render it out piece by piece - a technique formed and now hampered by doing Transformers so much - so I wanted to try to come up with another way to approach it.

And chrome is tough.  I did a character a few months back that had a lot of chrome, and I wasn't happy with it, I just didn't have enough time to develop it, but chrome is something that comes up again and again, and while I think I have a great handle on it to do pipes and other geometric shapes, doing a chrome over an organic shape is something else entirely.

So those are the learning goals, along with trying to make an awesome Joe piece...!
Posted by Ken Christiansen at 8:01 AM No comments: 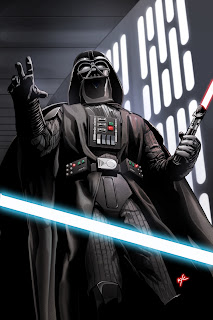 Lame caption aside, that's it for Ben Kenobi. 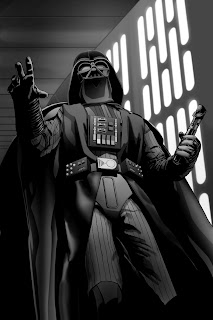 And here's the completed grayscale, before highlights, f/x, and punch-ups.  A little color goes on long way on this one, despite being mostly made up of near black to near black tones.
Posted by Ken Christiansen at 9:48 AM No comments:

So I've been doing some Star Wars lately.  And I've been wanting to do a Vader, and there's a (I think) Mondo print out there of Luke falling off the outcropping after Vader chops off his hand in Bespin, and it's a shot from below the scene, and I thought that was an awesome idea, to see such a familiar scene from such a different angle.  So I decided to theme this out as after Vader cuts down Kenobi, the point of view being as the robes fall away as Vader looks down in astonishment, but before he kicks around Ben's robes trying to figure out what the heck happened. 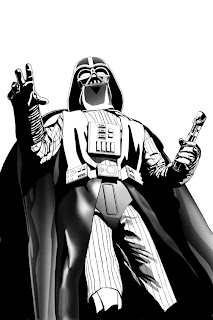 So I forgot to save my pencils again, but here's the almost complete inked version of those pencils, but with the robes starting to get the initial rendering.  The hip armor and the neck of the helmet also have the first gradient pass, but other than that, that's pretty much the penciled version. 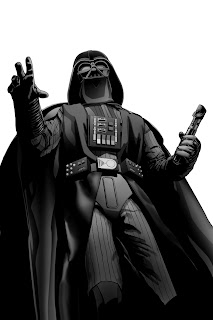 And now here is the grayscale render, primarily mid to dark tones.  Because Vader is made up of polished armor and leather in all blacks, I needed to take a different approach with the light tones and highlights...
Posted by Ken Christiansen at 8:34 AM 2 comments: