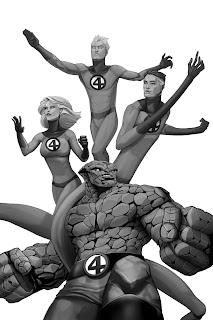 Here's that pencil drawing all rendered out.  At this point, three of the four can continue on in a conventional way, but I'm not sure how to create the fire and represent Johnny Storm as a guy on fire.  I've done a burning visage of armor before, but that came across more like the LOTR Balrog monster, in that there was some sort of shell containing the fire.  This guy is total fire (as least as how I want to represent him) but I started with this non-powered version of him, and then I'll build the flames up around him.

I'm pretty happy with how the Thing turned out as well...;)!

I took maybe a not-as-popular approach to Sue and Reed and tried to portray them not as hyper-beautiful hero/gods; they're both kind of nerdy scientists, so I tried to make Reed a little on the dorky side, handsome and fit, yes...but not thick necked squared jaw powerful.  And Sue, I tried to make pretty, but not fashion model pretty.  That was the intent, at least.
Posted by Ken Christiansen at 8:12 AM