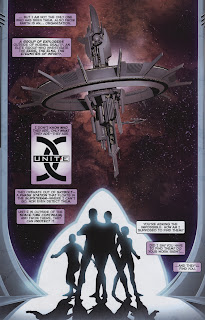 Finally.  Finally something I've* done for Hasbro that is shown to the world.  And I didn't even know what this was for at the time; done just about a month ago, it showed up as a page in the Hasbro Unit:E giveaway comic at New York Comic Con.   I posted it as released, though of course I didn't do the text, and the original art had a horizontal lens flare around the figures, that was felt to be too distracting.  I thought it looked cool, but now that I see the text/balloon placement, I can see how it could conflict.

I received the rough outline, and given a day to bust it out.  So the space station is about half of what I had pre-visualized in my head before I started, at least in terms of detail, but the foreground characters are as requested, kept in silhouette.

Though this was the only actual art that was done by me, I saw a lot of my other design work with HasLabs sprinkled about the pages, illustrated by other artists - some of the MASK characters, Tonrar, the tree/wood monster, parts of Acroyear...good stuff done by all.  But my absolute favorite image was the Jem and the Holograms, done by Peter Nguyen!

Of course I recommend getting your hands on it if you can, though I think you could probably only track it down on eBay...

*Prima and the Optimus Prime Truck mode, found in the Transformers Vault book, released earlier this year!
Posted by Ken Christiansen at 9:50 AM