OK, so I've been busy lately.  INSANELY busy.  Like entering week three of working all day every day, and it's going to last until the middle of next week.

Because of that, I don't really have anything to post, except for some 12th Cat cartoons.  Growing up in Washington State, I'm a big time Seattle Seahawks fan, and of course I still follow them just as hardcore even though I've lived in Los Angeles the last 12 years.

So, the Seahawk's fan base is called the 12th Man, for the insane volume of crowd noise that can literally stop a visiting teams offense from functioning.  It's great.  So I INGENIOUSLY adopted the name, and changed it to Cat, instead of Man.  Get it?

My wife bought one of our cats - Figi, my best mate and full time office cat - a little Seahawks jersey for game days.  To match me when I put on my custom CHRISTIANSEN #56 jersey for game days.  For whatever reason, I took to taking pictures of him and posting them on my facebook wall with captions, commenting on the game.  My friends and family were getting a kick out of it, so I created his own Facebook page.

Well, we were two seasons in, and then the old cat got sick and we lost him in 2011, right after Super Bowl weekend.  It sucked, and I miss him a lot.  But also, I was having a lot of fun doing this, so I decided to keep it going with a cartoon version of him.

The new football season has started, and despite the heavy workload, I have still managed to keep up with the season so far, and here's the first two cartoons of 2012.  If you didn't think I could get any nerdier... 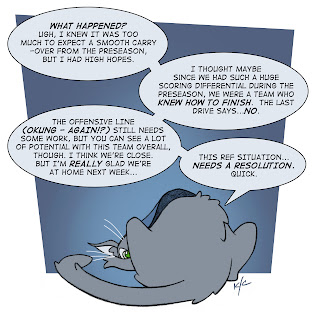 Game One, a near miss loss against the AZ Cardinals. 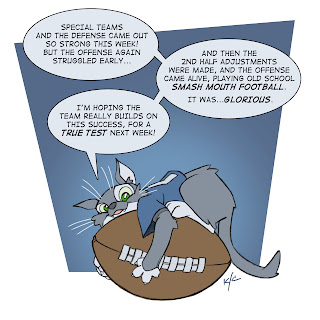 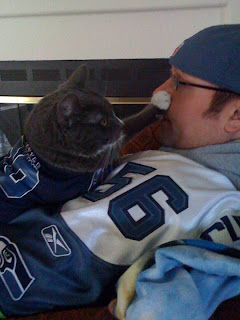 A pic of how we often watched the games together, but he drew the line at me yelling at the TV through his face.

If you could care less about football, or your team is decidedly not the Seahawks, please disregard, and we'll get back to Pop Nerdery late next week.  I need to do a color comp for the Predator epic, and I've got a hankering to do some Rocketeer studies....

UPDATE - And since it's relevant, and the only outside work I've done in the last three weeks, here's last nights 12th Cat commentary on the MNF debacle. 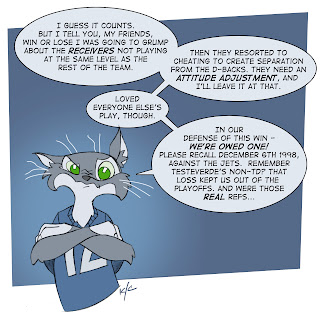 And again, I won't be posting for awhile.  I lost my grandma last week, and I'm heading back home to Washington to attend the memorial.  Then, when I get back next week, I'm switching to a new computer, so it might be some time before I get back to the personal stuff.  Of course, when I do, you'll be the first to know!

Yeah, another one.  I can't believe it's October already... 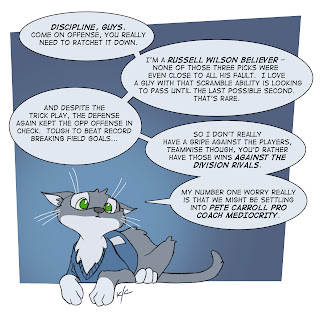