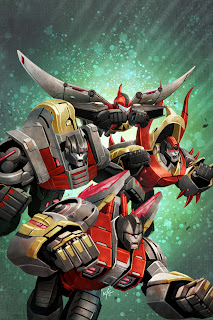 So Carlos dropped me a quick email, and asked, "how about the OTHER Dinobots jumping down at the viewer," so I whipped up these thumbnail ideas: 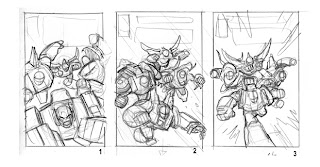 I think I pushed for #2, just because there was a twist on the angle, and I wanted it to be something different than TFP #1, just minus Grimlock.  Each one of those guys has stuff built up on their backs, so it's tough on the technical side to do a group shot, and not cover up important features on the 'bot behind in succession.  But I think all three could have come out pretty well - the third option in hindsight reminds me of the Giant Sized X-Men cover a little bit. 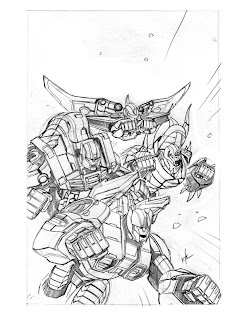 On to the layout based on the chosen thumbnail, to really figure out the composition, and both get it approved for final, and set up the final artwork: 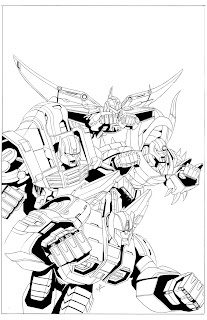 The final inks - other than cleanup, the big boys stayed pretty much the same, but I tweaked Swoop around a lot, just tiny adjustments here and there with scale and location.

So that's #6, out in October from IDW.  And as always, everything is for sale on the Facebook Page, or email me directly, this one is just now available in time to go down to Comic Con, priced at $400.
Posted by Ken Christiansen at 8:04 AM