I slightly altered the preview art - the cone of the Nemesis is supposed to go over the logo.

Anyways, I had finally met Mairghread Scott at BotCon, and we talked a little about what was coming up in the last two issues, and discussed cover ideas.  She fed me some info, and I scribbled out a rough thumbnail while she was standing there.  A little bit later Carlos stopped by to say hi, and I showed in the little sketch, and gave me the green light to go ahead.  Mairghread had to clear the reveal with the show runners, and I was moving forward.

Unfortunately, that little sketch was on commission scrap paper, that got thrown out when I got home.

Anyways, after I got settled back into the office, I went ahead and did the layout sketch, to make sure it was still what we all wanted: 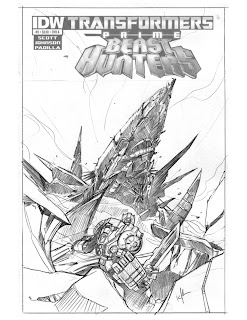 That got the go ahead, and I took it to inks: 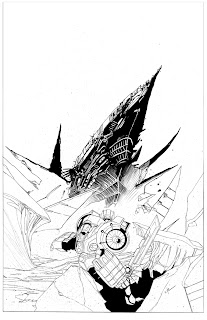 And then to final: 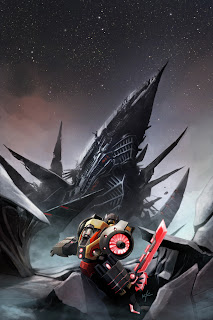 This might be my favorite of the run, I really like the mood; the ominous discovery of an Aubotbot discovering Megatron's ship, back on Cybertron.


Posted by Ken Christiansen at 8:45 AM