So we have Sea Lions to contend with, what other legendary creatures can we put in? Back to the Pirate Legends Book? A Gryphon guarding buried treasure? Badass! It's in!

What? No? And take out the sea lions too? This is the genius put in charge of production for the division - and I'm paraphrasing here - 'I don't think they're going to have all this supernatural stuff in the sequels, I like Captain Blood, I'm thinking they're going to go that way.' Did he read any new scripts, did he go to the production offices, did he know anything at all that was going on with the sequels? No. He's an unimaginative dickwad that's since been let go. Did he not see the first one? It had fucking walking talking skeletons running around! It still hurts. How happy was I when the Davy Jones images were released, and it was a dude with a squid for a head?! In fact, I'll now refer to the head of production as Captain Blood. Dipshit.

Since we were a couple of professionals, Karzappy and I had lots more enemies in mind, due to the fact we designed well rounded game pitches. We had Natives, British Soldiers, and a brilliant idea, in my opinion, that Karzappy had, The Black Cloaks. Basically Pirate Times versions of the Ringwraiths. Elite British mercenaries, pirate hunter badasses.

So here's some images to go with the rant... 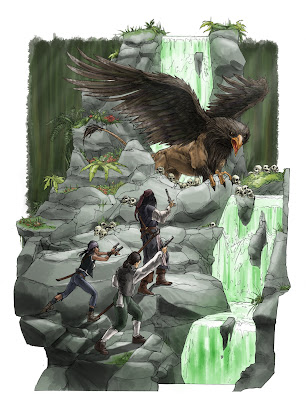 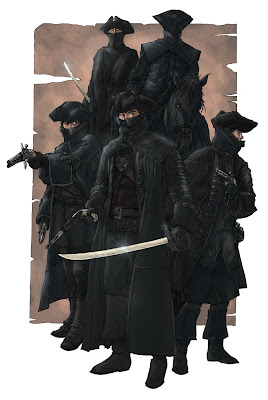 Posted by Ken Christiansen at 8:56 AM