So that's why he's got these big wing things on his back;

1. Break up the silhouette between WM and Iron Man.
2. House concealed large weapons.
3. Additional power routing, to make him more powerful than the Mark III suit.

And this is the big idea that never really got finished last summer, after being all inspired right after seeing the movie.

Now I show this to the Art Director here at Bad Flip, and he whips out his red pen, indicating reworks. 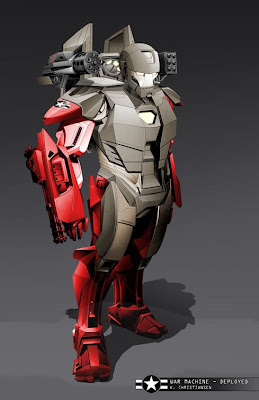 These arms and legs don't match the rest of the design, things would knock into each other, limiting movement, and the the stance is a little wonky, weird twists below the knee...needs another pass.

So expect War Machine V2, something good enough to get on the BFP website...
Posted by Ken Christiansen at 7:07 AM