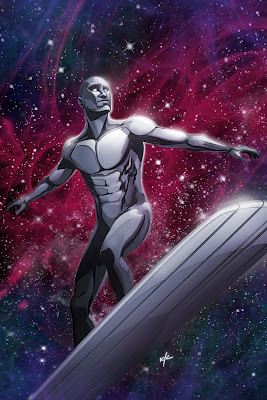 How Cosmic. It's kind of weird to see my new coloring techniques applied to an old drawing, it's a little hit or miss, but overall it came out OK.

His body is maybe a little more rounder on the edges than I would have liked - I really like the slat look to his torso and abs, I wish I had put a little more of that into his chest and arms, even his face. First time I ever drew the Surfer in a realistic pose/version, maybe I'll come back to it in a new image, and try to work out some of my design kinks?

On to the details. I have a little trick I do, when it comes to 'chroming' stuff - it doesn't always work, since I depend on a filter, but more often than not, it turns out OK. I wasn't quite happy with the look to the Surfer, and while I enjoy a more matte look to him, I still wanted him to have some chrome shine. So I copied the board and Surfer into a new layer, and hit it with the Photocopy filter at 1-50 contrast, with black and white in my palette. Then I turned that layer into a Multiply, to get some extra blacks, in a more organic way. Sometimes it looks like chrome, sometimes it doesn't. Then I take that layer, and use blurs, erasers, and opacity levels to get it to blend in with the under layer.

The back ground is a punched up starfield, that I warped a bit, and the cosmic is a Brusheezy brush from Hawksmont, (whom I highly recommend!) that I used a partial of, and then warped it and stamped it around.

Then a layer of diffuse highlighting, and I call it done!
Posted by Ken Christiansen at 8:29 AM