Tales of the Bounty Hunters 01

Along with those Avengers sketches...I started drawing good ol' Boba Fett. I've been reading the Tales of the Bounty Hunters book (how in my excessive Star Wars Nerdism have I not read this book in the 15 years or so it's been out?!) so I found some inspiration in that. When I got the book, the first thing I did was roll my eyes at the godawful photoshop slam that was the cover.

So I started with Fett, and then decided to draw Bossk, and then the whole Idea sparked that I should do a mock cover to that book. But good. For over ten years I've been wanting to do a Bounty Hunter image, I just never got around to it, found the right composition, etc. 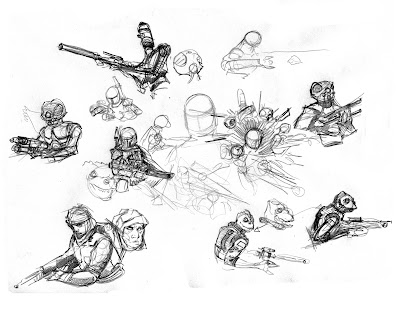 After Fett and Bossk, I drew in IG-88, and then the idea for the composition started coming together. Can't see it? 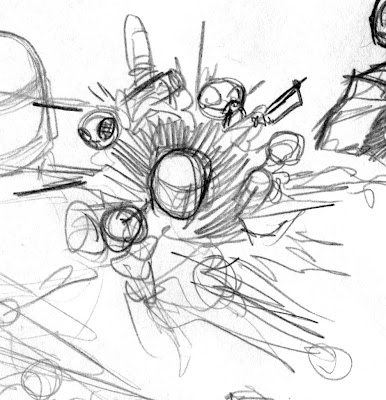 There it is! It was there the whole time, but mostly done in my head. So anyways, I sketched out the others, Zuckuss, 4-LOM, and Dengar, then composed them based on the rough idea. 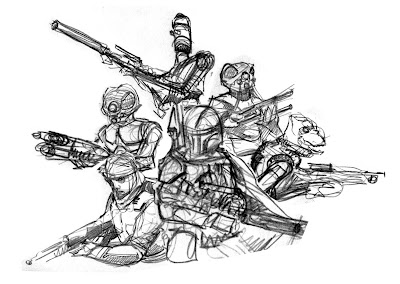 So, that's pretty good. I think I might turn Bossk towards the viewer a bit more, and do Fett with a more forced perspective to fill in that lower right.

I named this post an 01, because I'm for sure coming back to this, but I have a pile of other stuff that needs to be done first...
Posted by Ken Christiansen at 8:16 AM