So, I'm going to do a little dabbling in prop painting.  I probably haven't painted any kind of object in any way, since I was a kid, and had painted some models...badly.  I'm putting together a set of Boba Fett armor, but the pieces are in the raw, resin cast form, so they need a paint job.  That stuff is expensive (and the set is not yet completed) so I wanted to practice on something cheap, to get started with.

So I turned this: 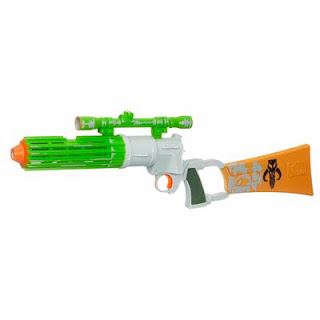 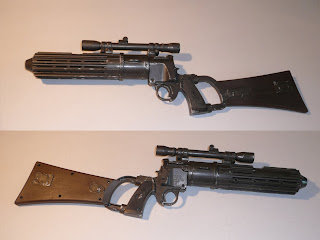 I took something Safe, and made it Unsafe, yay!!! 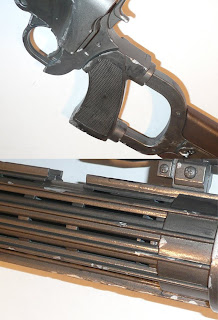 Before I started, I took an exact-o and knocked out some chips here and there, to give it some 'battle damage' areas, to go back over with the silver, to insinuate raw metal.

If you want to turn your fun toy into something that looks dangerous, and would give the police reasons to shoot at you, here's the recipe I came up with, it seemed to work out pretty well.

1.  The toy comes with the hilt unattached; I took it a step further, and unscrewed the fastener hilt piece from the part that makes up the 'wood' stock.
2.  Now you should have four pieces, the main part of the gun (does not halve apart, there's some glued bits, so unscrewing it won't separate it) the fastener hilt, and the two halves of the stock.
3.  On the work surface (for me, I have a giant roll of butcher paper that I use for my drafting table) I sprayed Rust-oleum Primer, mid-dark gray.  Spray in long strokes, as not to get wells of paint that collect on the surface.  Make multiple passes to get the coverage.  In this gun, there's a red light that lights up in the barrel and tip when you pull the trigger - I tilted the gun part and sprayed at an angle to try and preserve the light, and it worked pretty well.
4.  I took the stock pieces, and mixed up a batch of Liquitex Raw Umber, with a bit of black to darken it even more, and brushed on the paint in long strokes, with a 1" brush, to try to insinuate wood grain.
5.  Then, I sprayed the hilt and gun with Rust-oleum Hammered Finish...there's not specific color listed, but it's a warm, very dark gray, almost black color on the cap.  Both sprays came from Home Depot.  Again, long angled strokes, repeated until the coverage is complete.
6.  I also gave the stock a quick couple LIGHT passes with the Hammered Finish, to help meld the dark brown with the metallic color.
7.  Then I sprayed some of the Hammer Finish onto the work surface paper, to well it up to use as a palette, and I brushed on that color to the metal elements of the stock.
8.  After the pieces all dried, I put it all back together.
9.  I mixed up a light wash of Black Liquitex, and brushed that all over the piece, to make it look like grime and gunk, years of use built up over time.  I let it pool in the edges of things, and let it dry - that gives it a look that it's used, but not cleaned.
10.  Then, I took a little jar of Testors Enamel Aluminum, and went over the edges, and painted in with a very small brush, all the little nicks and scratches.  I have one side that looks good, and one side that looks awesome.  I kind of overdid it on the first side, made the nicks too larger in some case, some scratches too broad.  I reeled it back in for the second side, and it came out much nicer.  I suggest start very small, then build up on a second pass, if needed.

And that's about it.  Good times...it's a fun toy, really loud and obnoxious, with lights!

*I forgot to get the camera out for 'making of' shots, so I used the product photo from the interwebs.

Something else I didn't think of at the time, you could probably sand off the legalese that's in the mold, and fill all the screw holes as well...hmmm...maybe I'll make another one.  It's only a $20 toy, and there's tons of paint left over...?
Posted by Ken Christiansen at 8:46 AM

if you do decide to make another mod of the blaster please take photos :D
You created an awesome mod and i would like to recreate it but will need instructions (cause i stink at this). Help a fellow fetthead out

P.S. the captcha for this comment was titgrab, made my day.

I'm about to start doing the same mod to my Boba Fett toy blaster and I've found something that might help. To prevent from getting the paint down into the barrel chamber where the lights are, try cutting some strips of paper to slide into the slits and act as a protective barrier for the light display. Just make sure that they are long enough to leave some paper sticking out so you can remove them when its done. Otherwise, the paper will be stuck in there and you will have defeated the purpose.

You have no idea how happy I am that you posted this, I had the exact same idea when I happened upon the toy blaster at Disneyland!! My boyfriend is obsessed with boba fett and I'm STOKED to replicate his gun for a Christmas gift. If that boy doesn't drop onto his knees and propose on the spot I swear...

It is possible to take the gun apart by undoing all of the screws and removing the glued on parts by using very hot (but not boiling) water to break down the glue. Also don't put the too much of the gun into the water or you'll ruin the electronics.