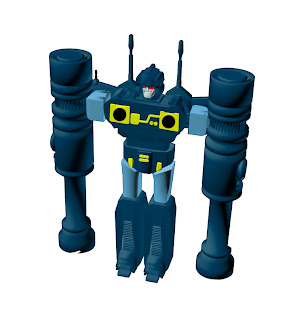 So after doing a block-in of all the shapes, I paused the 3D stuff, and brought him into photoshop for a quick color test.  Before any of you get fired up about the colors*, I'll just tell you that from my personal Transformers Canon, the G1 cartoon has precedence.  I lived in bliss until the Robot Heroes version came out, and had him colored red and black with his arms transformed into the jackhammers, so there was no escaping the ret-con, after all.  I guess I'll do two versions of the image, with the colors swapped. 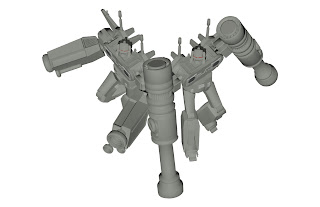 After the color test, I went back to 3D, to do some punch up with the shapes, and do the Frenzy version of the arms as well.  I put them in the pose from the sketch - and here's the awesome thing about 3D - so I could rotate the characters around, and reveal more of Frenzy than I had in the sketch, making a better overall composition than what I would have had, had I just began rendering from the drawing.

I might play with lighting and camera a little more before I find my final shot, but this is pretty much locked to go back into photoshop for additional rendering and color.

*OK, non Transformers Nerds...in the cartoon Rumble was blue, and Frenzy was red...the toys had the names reversed, and basically everything else outside of the cartoon had them listed this way.  This is kind of a new revelation to me, so those facts may be a little on the hazy side...but in my world, the cartoon rules.

Rumble is Blue, and Frenzy is Red.  So there.
Posted by Ken Christiansen at 9:08 AM

You're right about Rumble being blue in just the cartoon. However, with G1 (and most of the franchise), the toys came first. It's not known exactly where the switch happened, but the G1 cartoon's bible lists Rumble as the "red robot".