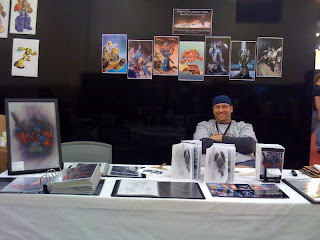 What a great time!  Here's me and my fat face at my table - I had so many awesome visitors come by the table, thank you so much to everyone who stopped by!  Three days of good times, Friday afternoon for the hardcore BotCon'er's, capped off by a great dinner with some pals from Hasbro.  Saturday was a looong day, but had a great finish at the Hall of Fame Event, of which I was lucky enough to be invited to contribute to the Erector reel, providing the 'Movie' version artwork.  Congrats goes to Waspinator!  We got treated to about 15 minutes of the Dark of the Moon footage - the rumble of the theater alone is worth the ticket price on this one.  I can't spoil anything, but there is a shot in the film, that I have been waiting a long time to see - Fanboy Minutia, true, but it's done very well.  One other great thing - MULTIPLE standing ovations for Peter "Optimus Prime" Cullen during the event.  And finally Sunday was another great day for meeting folks stopping by, and the Hasbro IP panel, where they revealed some of my artwork that's been kept under wraps for quite awhile; some of the 13 Primes, and additional character concepts, thanks to Aaron and Rik for the shout-outs!

I also want to give a big thank you to my wife Keri, who helped me out and held down the fort while I was out playing around, and bringing me food (and even to Marcelo, who had a table next to me, who was without a helper on Sunday) and chatting with people who stopped by while I got lost in the zone of doing sketches - THANK YOU THANK YOU THANK YOU!  I could not have done it without you! 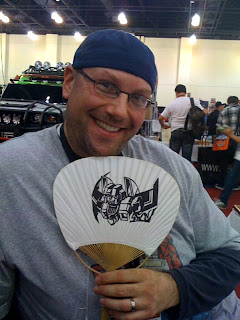 This was a gift from a BIG Sunstreaker fan, who goes by 'Brain23', (on deviant art) a very kind Japanese woman who stopped by my table many times, and kept throwing money at me, and at the end of the con, she gave me this, a Starscream fan - how cool is that!?!  It will find a place of honor in my studio. 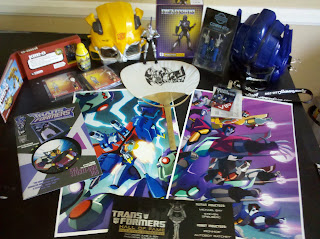 Here's a pile of some of the awesome swag I got from the con, of course the comic, (which, like a dumbass, forgot to ask Marcelo Matere to sign, but he did sign his sketchbook for me!) and we traded some prints, I got his two impeccably awesome TFA prints, some of my favorite Hall of Fame giveaways, the Matrix Prime Kre-O giveaway, and some stuff I bought, a Nightbird, Spike & Sparkplug, and blue Rumble figure items, along with the fan from Brain23.

I had a great time, and would love to do it again, thanks again to everyone who stopped by!

There ARE leftover sketchbooks, I'll be posting worldwide order details in a few days, if you were unable to go to the con and wanted one, stay tuned...
Posted by Ken Christiansen at 1:39 PM

Glad you had a great experience buddy! I would have loved to have been there to help, maybe next year I can be your gopherbot?

What an excellent and uniquely inspiring you have posted.