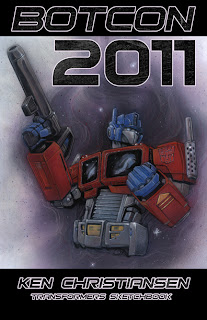 Leftover Sketchbooks from BotCon 2011 are now available to order!  Here are the details:

$15 for just a sketchbook, $25 for a sketchbook with a quick sketch on the inside cover (examples below).

Email me at ken@badflip.com, with 'Sketchbook Order' in the Subject Line, let me know what you want, and I'll create an invoice for you with payment options.

Here's an example of some quick sketches I did at the Con: 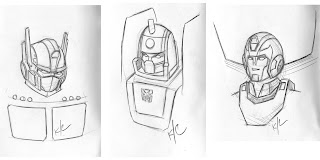 Basically a head sketch, and I try to work in some character silhouette iconography as well.  You  can ask for anything* published (it's not ALL G1!), these are just a few pre-sketches I had left over - I did a little bit of everything over the BotCon Weekend,  TF:Prime Starscream, Animated Bumblebee, G1 Ravage...just let me know!

Remember that I'm working on projects full time, and I'm handling all this myself; the plan is to take orders during the week, then create invoices, do the sketches, and fill paid orders on the weekends, and ship out on Mondays.  I will get them out as fast as possible!  THANK YOU!!!


*Please don't request sketches or recreations related to anything shown or discussed on the toy and IP panels at BotCon, or even a sketch of Prima, even though he's been published.  That stuff is still on the Down Low, and it will get me into Big Fat Trouble with my friends at Hasbro - just existing, (old and new) published characters.

I reserve the right to refuse a request, due to trademark infringements and my non-disclosure agreements, but I will absolutely offer an alternative.  Example: I can't take requests like a 'Ravage in the Transformers : Prime/Universe Style' - I work with Hasbro on IP development from time to time, I don't want to be held accountable for an idea that someone has, that has the potential to show up later in media or products, whether or not I had anything to do with it.  My alternative offer would be that I'd do a Movie Ravage in the G1 cartoon style, or something like that.  Thanks for understanding...
Posted by Ken Christiansen at 9:51 AM