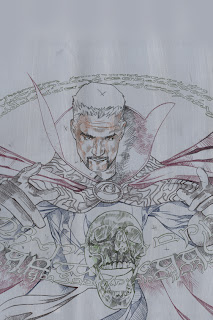 This is the transfer drawing, from the tight pencils, to the gesso prepped board.  This time, instead of using an 8B graphite pencil for the drawing, I went with almost entirely prismacolors, picking the darkest color I had to put under what would be the corresponding paint color.  Red cape?  Dark red pencil for the drawing, for example.  After all that did I then bring back in the dark graphite pencil, to deepen the darks. 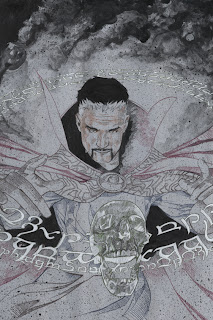 After I settled on the drawing, I painted in the blacks, and did some tonal spatter.  And since I wanted to do a glow effect for the lettering, I filled in the outlines with white prismacolor, to maintain the forms throughout the painting process - I didn't want to lose the detail in the blending, nor spend a ton of time masking and remasking them. 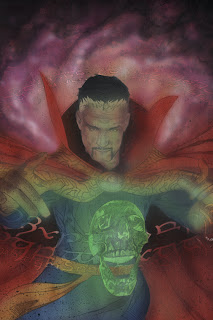 I masked off the painting three times, the background, the warm colors, and then the blue and green.  Then an overall unmasked pass with the green glow color to bring it all together.  And since I filled in the lettering, I can still find the shapes to bring them back out.

On to the penciling...
Posted by Ken Christiansen at 8:00 AM