So, I lost a friend over the weekend.  He'd been battling illness for the last few years, and finally lost the fight, leaving behind a beautiful wife and twin girls, who are absolutely darling.

I believe that without Keith, Bad Flip Productions would not exist.  So today, any of you TransFans and Hasbro lovers out there that like my work, you can thank Keith Hargrove, for setting me on the path.  During the Great Disney Artist Purge, near the end in Michael Eisner's reign at Disney, I was laid off.  My friend Keith flipped the F out, and set me up with a contract for another 2 months worth of work, post my end date.  Doing that forced me to start my own company, and gave me the start up money to give it a go as a freelancer, instead of just trying to find another office job.

The funny thing was, that after nearly four years of working there, and despite being on the same development team the whole time, we barely ever did any projects together, until that last year, and even then, it was a super rushed outpouring of ideas, that barely made it past the rough pencil stage.  Not until I was out of the office, did I really color any image I did for him, and for our projects.  Here's samples of the fun we had together: 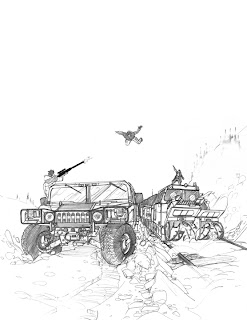 At the time, Miramax was getting a lot of genre scripts through their offices, and in the spirit of company synergy, we got tasked every now and then to scribble out some ideas.  Until eventually the studio would pass, and it would become nothing.

Above is my favorite shot from the Six Million Dollar Man pitch we came up with, basically a game mechanic of 'super leaps' from one moving vehicle to the other.  Of course no color.  We had one week to design a game, along with maintaining our currently ongoing projects. 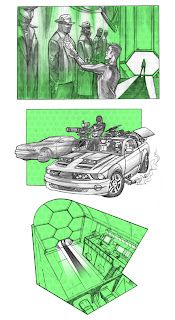 Oh yes...Green Hornet, when the Wiensteins wanted Kevin Smith to direct.  Whilst he 'scripted,' Keith and I went off on our own story, based on the TV show mythos, with some upgrades.  Pre-release 2005 Mustang, I lobbied to use that as the Black Beauty, and we took it from there.  A Suit Museum and an HQ establishing shot, also included.  Obviously nothing ever came from it for years, and then from a different studio. 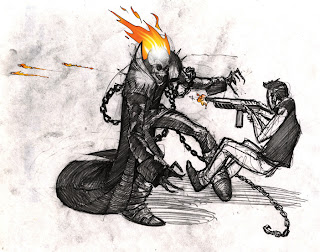 Oh look, another movie that went nowhere for years, the most horrible Ghost Rider script ever (yes, different and much worse than the actual but also horrible Cage movie) so again, Keith and I took liberties, and just tried to come up with a cool game.  I believe this shot portrayed a limited invincibility.

That's right, Disney Transformers.  Keith's idea, that I of course was ALL OVER, when he approached me about it.  This was before Crossover's - he was a visionary, people.

And the summer before I left, ideas for a new Pirates of the Caribbean game, in which I went into great detail, awhile back.  (Full disclosure now, "Karzappy" was Keith!)  Below was his super badass idea for the Black Cloaks, supreme pirate hunters, big bads in the proposed game. 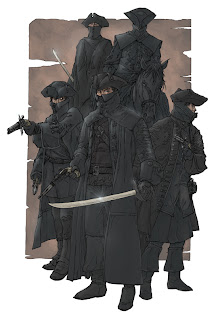 So we weren't quite wrapped on the project when I got the axe.  Which is why Keith flipped out, he needed me to finish his art, and we were already talking about moving on and trying to get a TRON 3.0 game going.  I'll post snippets, as this isn't exactly cleared to publish, but I imagine it will never go this route, now that there's new movies coming out, Legacy, etc., and this is going on 8 years old, and was immediately passed on... 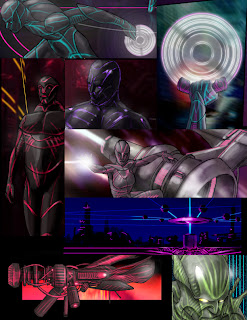 It.  Was.  Batshit.  Stephan Martiniere was a contracted contributor, and Kurt Busiek was writing some storylines.  I took it another step, and we did almost a glass like skin over organic neon piping - TRON but not.  In and out of the real world, all kinds of stuff.  Tons of colored pencil sketches.  At least TRON and Pirates got some splashes of color...

And here and there I helped out with his ESPN projects, and also worked a bit on Stunt Island 2 (which went nowhere fast, but I STILL get emails about it every now and then) , trying to get Marvel to partner up with us ( OH, THE IRONY!) a meeting at comic con with Alex Ross to create a superhero universe, ala City of Heroes - along with being in nearly every meeting together, company function, group outing, etc.; I enjoyed the hell out of being around him, or working on projects together, as infrequent as it was.  He would get so enthusiastic about trying to get these projects going, it was infectious, and I started doing my best work in those last few months.

He always believed in me, fought for me, put up with me, and was always a great friend.  As we went out separate paths in business and life, we never got to work together again, although we came close, but he trusted me enough to give him a post-mortem on his Ghostbusters game (oh yeah, remember that game?  Click the link and watch a video of Keith, reintroducing Dan Ackroyd to the Ecto -1!!!) and exchange ideas on our creative endeavors, both personally and professionally.

Another connection we had was football, me from Washington State, a Seahawks fan, and Keith from Texas, and damn Cowboys fan.  That's right Keith, you might be gone, but I'm still going to talk shit about your team.  And lately, the Seahawks vs. Cowboys was practically an annual thing, so we often tried to get together to watch, even if that was the only time in a year we saw each other - a great reason to make the effort to stay in touch.

So a few weeks back, our teams played, and it was time to do a bit of hanging out.  Unfortunately, he wasn't quite up to sitting through a whole game, and honestly as it turns out, I wouldn't have been up to three hours of his cackling, as his 'boys beat my 'hawks.  But I did go over later in the day for a visit, to sit a bit and chat with Keith, his wife, and watch their girls play and play.

Darkness fell, he was wearing out, and it was time for me to go.  I had made sure to tell him and his wife that their support meant so much to me; I wanted him to know, even though I told him a million times before, that I owed him so much for the direction my life took since 2004.  The support he showed to me at that time still meant so much to me.

He walked me to the door, I told him and loved him, and hugged him goodbye.  I found out yesterday he was gone.

I'll miss you, Keith, but wherever you go from here, as always you'll be in my heart.
Posted by Ken Christiansen at 11:17 PM

That was really nice to read...

Kenny Bear... you know that I lost 3 dear people in one year and Keith found me curled up behind my desk, crying after I had learned of the 3rd person's death. All I remember about that day was Keith picking me up, hugging me and helping me to get home-and always being extremely kind to me after that.

Keith was one of the good ones. And so are you.
-Sandee

Thanks for the post. It was so good that you got to say " I love you." He was our friend and neighbor in Lumberton. " Go Cowboys!! Win one for Keith!!"

Keith was one of the good guys.....God Bless his family. He will be rightly missed by all who knew him.

His funeral was last Sunday, full of tears and laughter remembering our friend.

Sandee, you were missed by the old DI crew!