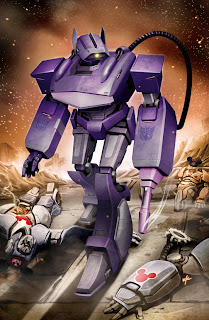 Well, I was going to debut a new image on the blog today, but given the Disney/Hasbro rumors swirling - originating as a rumor (I'm looking at you financial news aggregates, nice sourcing) from MTV Geek News of all places - but I thought I'd tweak it just a bit in a quasi-response.

I wouldn't be sad or upset or anything if it were true, regarding Hasbro's properties being taken over, but I would be even more disappointed in how pathetic the once mighty Walt Disney Company has become, in terms of leading the way in story telling and IP creation.  When I was there, we had to put up with crappy sequels of classic animated films, then they started buying up IP and companies like Pixar, the Muppets, later Marvel - the Lucasfilm purchase does make a lot of sense, but again...I know there is a massive talent pool at the company that is continually overlooked by the clueless MBA's running the place these days, looking down at marketing trend spreadsheets for answers, with no vision of where fresh ideas could go.  To ignore what those people are capable of doing, and cultivating and retaining those concepts and building the creative core of the company like Walt did back in the day, is again, pathetic.  Sitting around buying other companies successes is a shame, when you have the exact same resource already on the payroll.  As a creator, it's very exciting to have the opportunity to play with the new acquisitions, but it's also bittersweet knowing you have to shelve your own internal development to handle the intake.

Of course it makes great business sense to do these things, but it's a little sad to me, knowing they have great talents working for them already, dying for the chance to create those new worlds and characters for Disney.  It makes me wonder, in the long run, if we as fans are going to be getting less out of these companies and properties due to the abundance of riches?

So, it's not really a statement of Hasbro/Disney being a bad thing - I love Disney, Marvel, Star Wars, and Hasbro, look at the majority of stuff in this blog the last four years! Why not have my four great loves under one roof? - it's more a lamentation of exciting things from Disney that will never see the light of day due to the consolidation of these businesses, there's just no room.

Any ways, those are my thoughts on this rumor - the real Shockwave image goes up tomorrow!  If you can't wait, just imagine no Mickey Mouse Club hats, and Autobot symbols instead of Mickey heads.
Posted by Ken Christiansen at 10:17 AM

Plus with Hasbro under Disney, Hasbro wouldn't be paying Disney $$$$$$$$ for the licences of Marvel and Star Wars.

Counter productive for Disney I'd say.

That's a great point, but I wonder really what the numbers would run. Total ownership, plus the ability to license out again on top of it.