Transformers Prime : Rage of the Dinobots #4 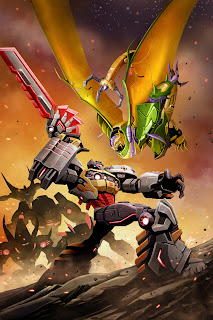 Grimlock vs. Ser-Ket, as the other Dinobots look on.

The editor, John Barber, suggested a fight scene for the cover of the final issue, pitting these two against each other.  I did a few sketches, and we both settled on this one, portraying the clash at the point just before impact.  The full weight of Ser-Ket is bearing down on Grimlock, stinger poised, and Grimlock has his sword extended, ready for a downward slash - who will draw first energon?

Well, that was the idea anyway.  I hope it comes across...

OK, on to the making of and technical stuff:

Here's a look at the thumbnails, 1 and 2 are essentially the same, a closer-up shot of the two grappling, the 3rd is a front shot of Grimlock getting choked out by Ser-Ket, and the fourth is the one chosen - just as dynamic, but leaves some room to put indications of the other Dinobots. 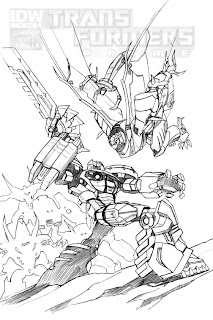 This is the layout sketch to get approval to move on to the final, with the temp logo added in, so I can get the best composition.  I had drawn the other Dinobots silhouettes separately, so I could tweak them here and there to get the right balance. 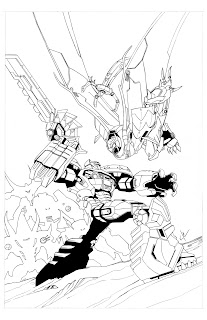 And so here is the final pencils/inks to take to final.

And that wraps it up for this series, I think issue one finally hits shelves tomorrow!!!


This cover art, and the art for the rest of the series is on sale on the Bad Flip Productions Facebook page, along with leftover convention prints and sketchbooks, in the Original Art Gallery and Convention Artwork albums.


Posted by Ken Christiansen at 9:56 AM