It's that time of year again...getting close to the three year anniversary of the Bad Flip Blog on August 13th, and you longtime followers know what that means - Chewbacca!  I started this blog with a horrible rendition of Chewbacca, and now it is tradition to do a new Chewie every year.  Usually, it's a painting, but this whole year so far has been doing paintings in the off hours, so I thought I'd change it up this year, and do a toon version of our Furry Friend.  I haven't used this style much this year at all, so I needed to do a bit of a warm up... 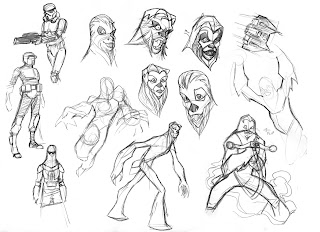 It took me awhile to find the right face for ol' Chewie, along with some Imperial Trooper doodles thrown in for good measure...although eventually I found a good face, and a good pose, with his crossbow, to take to the next stage.  But, I was having fun, so I just spent the night sketching while we watched Cheers reruns...! 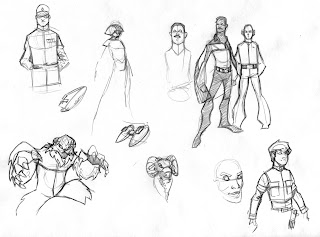 I thought that I should make this an Empire themed Chewbacca, due to the 30th Anniversary going on, so I continued with doing some more characters from that chapter.  A horrible attempt at a Taun Taun and Wampa...but I found pretty cool Luke and Lando designs, to maybe develop at a later date. 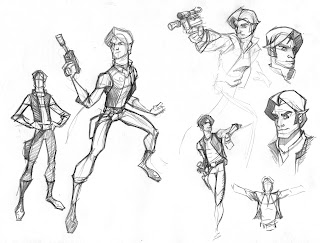 Then of course, Chewie's BFF, Han Solo.  Kind of a cool body shape in that standing pose, but none of the heads are quite right. 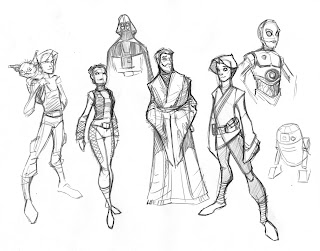 Nothing especially valuable in here, maybe the Hoth Leia costume, the Tatooine Luke costume, and also kind of a funny head idea for 3PO, too.

I did it all from memory, so there's things in most of these that bug me, because I know they aren't right...but it gets the gears working to maybe do more Star Wars in my Toon Style.

Anyways...it's Chewbacca Week, so I better get back to him!  The pencil drawing for final, tomorrow...
Posted by Ken Christiansen at 10:24 AM