Get ready for 'Cute.'

I let that last post hang there for awhile - make sure everyone had time to read it, despite whatever headline they clicked on, from whatever site had a story that led them to believe otherwise about the actual content of my post.

Yikes that sucked.  My wife told me that's what I get for drawing robots all the time.  I told her I don't get paid to draw kitties.  She said, 'You didn't get paid to do those robots, either - and look what happened!'

Wife Wisdom, man, listen to it.

I said 'Fine, I'll draw some kitties.'  Squeals of joy.  I actually did have some vague ideas floating around my noggin, about a series of a girl and some cherub cats.  I wanted to do air, land, and sea themes, so here goes: 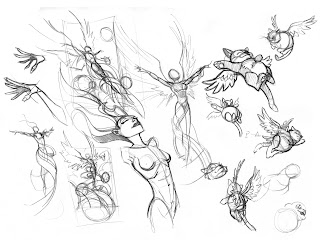 Here's some rough ideas for the first image, an upshot of a girl with feathered wings, with three Kitty Cherubs flying around her, swirling up into the clouds.  I was cracking up as I drew that one on his back, mimicking the pose of the girl - that one's in for sure...

Tomorrow, Mer-kitties.
Posted by Ken Christiansen at 9:01 AM

This just makes me think: "hey, Ken, have you met Brianne Drouhard?"

She was a character designer on Transformers: Animated, and as her wiki page says, her art can melt a heart of stone.

Hey, that's great! I've not met her, thanks for the tip!