So Pete is revealed as the seventh Guardian, the one who has fallen into the control of the Demon. This wasn't yet written at the time of the presentation, but here's a paraphrasing of the backstory.

This character was the youngest of the seven, and he fought the most ferociously, and he volunteered to be the first to serve as an earthbound protector. He lives a solitary life, watching over the kingdom as it grows into prosperity. A few Kings come and go, and then, near the end of his time on earth, the newest King has a daughter. She's super hot, like all princesses should be, and he falls in love. They have a secret love affair, but the demon in his weak and disembodied state, is all seeing and knows about the romance. He starts planting seeds of of rumor to the king, shadowed whispers, books open to stories of the Guardians, and eventually convinces the King his daughter has access a token of Power. So he sets up an ambush at a secret love retreat, it goes wrong in the attempt to capture the Guardian, and the princess is killed. Pete goes apeshit and destroys everyone, and consumed in hate, he takes the king's role and declares himself Emperor. The Demon's plans are finally set into motion, as Pete creates soldiers to enforce his rule, all the time being a puppet to the influences of the Demon.

Here's Pete in all his eviltude. 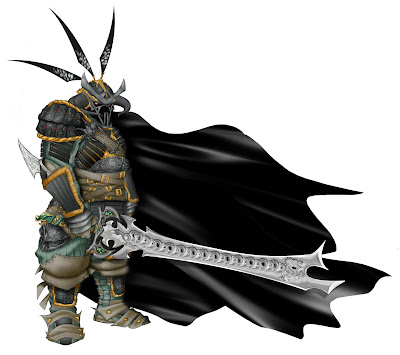 Posted by Ken Christiansen at 8:29 AM