War for Cybertron - Prime vs Megs 01 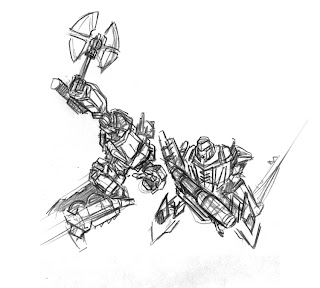 I...I think I finished the game...but I don't remember fighting these guys together.  Hmmm, sequel?  I'm not a big fan of the Unreal Engine, so I was a little worried about this game, but it pretty much rocks.  I have two gripes that keep it from being a '10' in my book - and these are done so well in the RotF game, so I'm a little biased - the ease of Transformation wasn't quite as organic as the prior game, somehow Luxoflux made it seem you could be a vehicle or robot at the same time, and exploit that to defeat enemies, I really missed driving full bore into an enemy and transform/crashing into him.  Also, the melee moves were a little frustrating, in that you would trigger the one (only?) move, and have to wait a little too long until it was done to continue, or set up another melee move.

So a more organic and adaptable transformation, and adaptable (and multiple!) combat moves would make me give this game a 10, but those are really finesse aspects that could be solved in the sequels.  I don't really have an art bitch, it's not quite the way I would have gone, but really, it's unmistakably Transformers, and that's all you could ask for, right?  I think the only thing is that the transformation animations are a little sketchy, some of them looked like a kicked chicken...I couldn't see the logic in the flurry of the animation.

But really, it's a super fun game for anyboy, and if you're a Transformers G1 fan, it's near sublime. 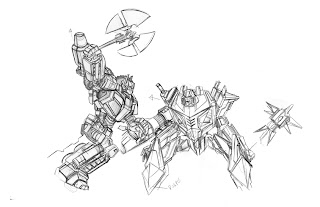 I had a stick figure drawing set aside, of this basic scene.  I didn't know if I was going to do it at all, or maybe try my hand at a more abstract painting, but I was thinking of trying something more painterly with Transformers.  But now I'm not....going digital with this one!

I figured I'd turn the scene into the War for Cybertron versions...let's see how it goes.
Posted by Ken Christiansen at 8:59 AM