War for Cybertron - Prime vs Megs 03 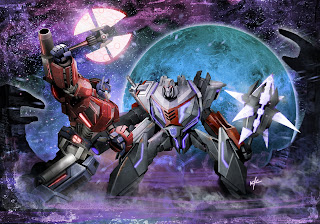 This sucks.  This is photoshop hackery at it's best/worst.  I threw in a bunch of photos, and tried forever to get a balance going.  Stars, a pic of Mercury, a pic of Venus, some Grand Canyon rocks, a bunch of brushes and colors to try to get everything tied together.  Trying to get that Megatron to balance out in the frame with the planet behind him - it's just plain overdone.  I knew it already, but I had lunch with a genius art director yesterday who called me on it - Justin Thomas, the AD from the RotF game (among others).  I love you, JT!  I brought it along to show him, and he said no.  After confirming my reservations about this one...I did a rework last night; 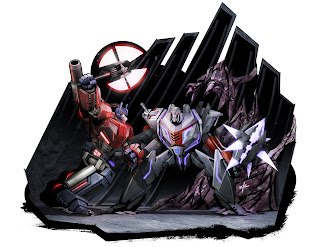 Why is this better, young artists might ask?  It's not as flashy, it's not as colorful!  No, but it brings the focus back to Prime and Megs, and I placed some Dark Energon crystals in the background, making it actually relevant to the source material, the War for Cybertron game, unlike the comped images of organic-y, planet-y, crazy color fun time of the original attempt.  Also by placing the Dark Energon behind Megatron, it actually is incorporated into his form, balancing him out against Prime, better than any recolored planet could.
For the shape of the background, I kept the relatively horizontal base for their feet, but went abstract to create a little more energy in the frame.

So there kids, accept valuable criticism and be awesome.
Posted by Ken Christiansen at 10:28 AM