...and I'll take the opportunity to let everyone know I was not invited back to work on any Transformers games from Activision.  Daniel Suarez, who hired me in the first place for TF1, and brought me back for RotF, had moved on to run the Call of Duty franchise - the Transformers franchise changed hands internally, and I got lost in the shuffle, I guess.  And despite the awesome Mr. Suarez (buy his new game!) continuing the advocate for me over the spring and summer to land a booking on any upcoming Transformers games over the summer, I wasn't able to make any headway.
Of course, business is business, but I hoped all the efforts I had put into the first two games+ would leverage me into a least some consideration for a position, but it didn't work out that way this time.  So who knows when I'll get the chance to create more Transformers video game characters, but I thought I'd leave you with an image I have been wanting to do for some time, kind of a character lineup: 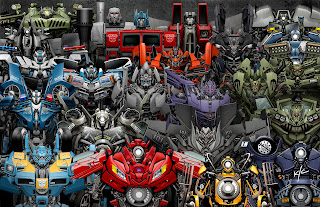 That's 19 unique characters, 1 movie-ized G1 character in Shockwave, and 3 G1 DLC characters.  Six characters made it out of Game Canon and got action figures and appeared in IDW Comics!  I hope I get to add to it one day...
Posted by Ken Christiansen at 7:38 AM

Man, that sucks. So you didn't get to work on War for Cybertron?

No, that was already well into production while I was designing characters for RotF. I was never able to connect with High Moon despite several emails on my behalf, including Aaron Archer himself introducing me to the head of the development studio - it all went nowhere, so as long as they have the toy box, it doesn't seem they're interested in me working for them.

They do have a pretty strong concept design team in house, it's doubtful they would need to hire contractors when they have so many great artists on staff already.

Sucks for me, but Hasbro has been keeping me fairly busy, and I still get to contribute to the TF universe from time to time.

so that mean we will not so somne of your cool designs in the third transformer game ??

Nope, no video games at all. At least, not directly.

Well, boo on High Moon. I was looking forward and had hoped that you'd be designing for the 3rd game.

I still want Hasbro to make figures of your RotF designs, especially the Combaticon Helicopter, Seeker, Stunticons and Omnibots.

And it looks like have a new Desktop picture.

I am SO using that for my desktop wallpaper, just for the fact that I'm a fan of your work.