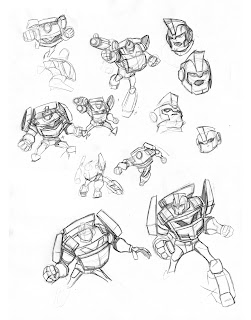 I'm still kind of struggling with that Ironhide image that's been laying around now for months.  A friend of mine sent me an Animated Ironhide toy, and I play with it all the time, make him fight other toys - it's great!  So that kind of reinvigorated the idea, but I wanted to try my hand at an TFAnimated version of the scene.

And even then I'm not sure where to go with it, finish it in my animated style, colored line art, shading etc., or do the TFA style, but finish it in the fully rendered style I use for my work?

Any opinions from TF fans?  I'm checking into the idea of getting a table at BotCon 2011, and if I land one, it would be a print for sale - Animated?  Rendered?  Both?

Anyways, tomorrow the Alt mode, plus the rough composition.
Posted by Ken Christiansen at 8:45 AM

Transformers Animated Style. Are you going to have him as the silver indestructible version or the normal red colors for robot mode?