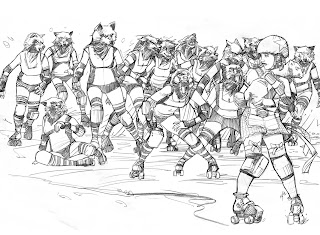 Here's a preview of the painting I'm contributing the Eat Your Art Out IV show held at Meltdown Comics, 02/26/11 in Hollywood, CA.  It will be a part of an auction to raise money for the Angel City Derby Girls, who, and I quote;

'(We) are a group of dedicated women athletes who have come together in a grass-roots effort to organize a democratic, DIY, member-driven and operated Los Angeles Flat Track Roller Derby League that abides by WFTDA rules and regulations in regards to the game of Roller Derby. We are building a strong league of highly skilled athletes who are prepared to compete in interleague/interstate WFTDA competitions.'
They, and the national league they are a part of, are complete and total badasses.  Who wouldn't want to help them out?  It's either that, or a skate over your foot and a knock to the nuts.
Anyways, back to the drawing above - the theme this year is Dark and Mysterious Origins of Nursery Rhymes, and after doing some research, all the best ones resulted in a king or queen getting their heads chopped off, which wasn't really inspiring me.  So I went to other way, and picked the wimpiest and most common rhyme, with the origin story literally being the content of the words - no mysterious origin here, for Mary Had a Little Lamb.
I decided to do the little known, (and oft told in hushed tones) story of the after school walk home, and how a pack of wolves came upon Mary and her Lamb, and tore them apart and ate them.  And because it's for ACDG, I wanted to incorporate a Derby theme...
I wanted to throw this up now, to plant the seeds of awareness of the event across the internets, but I probably won't get to the painting until Christmas break, and then I'll start posting about it again, when the event gets nearer.
Posted by Ken Christiansen at 8:40 AM

Your right of course, many nursery rhymes do have particularly dark tones in their original forms. I do love the artwork you came up with for this one, great take on it.

Love! I would say post a final after the show. I know I want to be surprised. :)