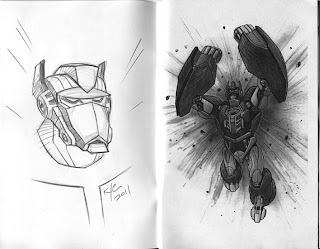 The last of the sketchbook images I'll post, including an example of the quick sketch I'll provide if you choose that sketchbook option.

BotCon is awarding hourly door prizes during the show, and this is one of the items I'm donating, my sketchbook with an Animated Prime sketch on the inside cover.  And then, of course is the first page of the book, Optimus Primal breaking through with some whupass.

First time EVER, for drawing Prime as either of these two versions in the canon.

The other door prize giveaway I'm donating is a print of my Animated Ironhide.  Now you might say, big deal, I can just get one at your table if I don't win - but no, Transfans - I'm just selling the Red version of Ironhide.  The door prize is a special 1/1 print of the Silver Indestructible Animated Ironhide!  I ran a single print, specially for BotCon.

All right, that's enough images shown from the sketchbook, now you gotta come down to Pasadena and get one!  Next week I'll post some other goodies I dug up from the flat files, to have on hand for sale next weekend...
Posted by Ken Christiansen at 10:04 AM