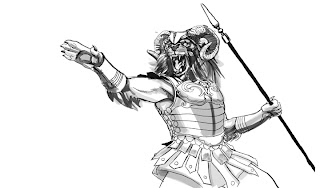 This is the exact same process I used for the Predator image, so maybe refer to that for more in depth techniques, but I'm sure there will be some cross over.  I had the pose in mind before even starting, but it took a couple of sketches to land on the right angle.  Again, I'm still not really blocking out in color, depending more on some sketching (which I accidentally deleted!) to get to the more or less tighter drawing.  It's pretty straight forward, I combined a couple of Roman armor looks, from found replica costume pics on the internets - I wanted to achieve a mix of leathers and metals.  But I wanted a more gladiator type helmet, and I thought a lion with rams horns is probably going to look pretty cool. 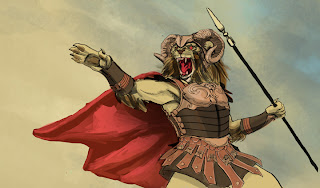 I blocked out the background colors, and then chose material colors for the primary and secondary flat colors, on an layer underneath the drawing, preserving some of the shading to use when I merge color to drawing. 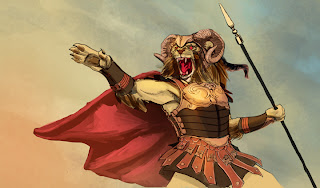 Here I bumped the saturation up, and did an overlay pass with a light golden color, to bring out the lighter points, to use as color picks for the rendering. 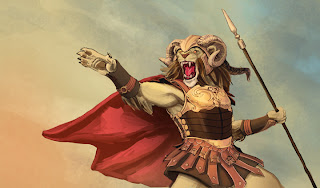 So here is the beginning of the rendering - I had merged the color and lines - I start with the face of the lion, as that is going to be the intended focal point of the image, so that gets the most clean up and attention. 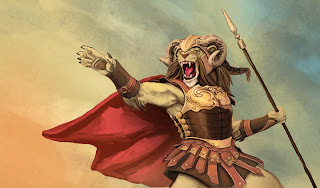 So begins the multiple passes of detail, starting out with a bigger brush and broader color strokes, focusing in tighter and tighter as I go. 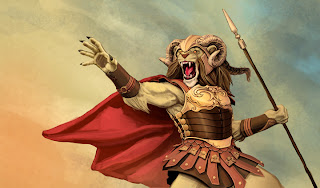 By the way...that outreached hand was bugging me to death.  So I buffed it out, took a photo of my hand, inserted it and did a paint over to match the rest of the lion.  I had sketched it more than a few time before starting the color render.  But I was feeling pressure to get going on the image, so I called it good enough - I painted that hand at least three times, and it just wasn't dynamic enough.  So that's a lesson : If something doesn't work in the drawing, it's still not going to work in the painting. 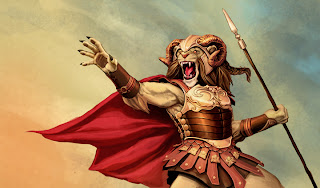 So this is the pre-final pass.  I'm pretty happy with the figure overall.  So here I take a break, and then come back with fresh eyes to put the finishing touches and atmosphere blends. 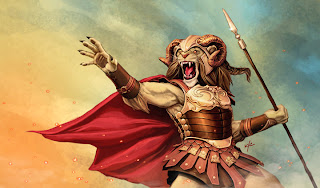 Final!  A bit more detailing, color adjustment, and a little bit of foreground haze to tie every thing together.  He's in a fighting pose, so I wanted to insinuate something off screen that he's facing down, with the drift of embers...
Posted by Ken Christiansen at 9:10 AM