It was inevitable that I would hit a speed bump in developing these new (to me) painting techniques.  Well, ladies and gentlemen, here it is.  Let me just start with the roughed out image, because in all honestly, this is exactly where it went wrong.

I had a quasi-idea of what I wanted for the composition. but a very specific idea of the monster.  I had this sketch laying around for months, and I'd been wanting to do something with it.  Instead of drawing a frame from scratch, using the lion and a new drawing of the monster, I just incorporated the sketch into the image, figuring I'd build around that.

I wanted to show cliffs, some city elements, and make it a beachfront temple scene like the Kraken finale of the original Clash of the Titans, so I scribbled it all out - around the old drawing of the monster.  And what I did was force EVERYTHING to conform to the monster, at the expense of a strong composition, with a definitive focal point.

And what I got was this.  A pretty cool monster, surrounded by mush.  What is that ring around him?  It's supposed to be a pit with a ring of columns around it, with stairs leading up to it.  But the Lion is higher up than that, on a...what?  Earthquaked ground coming up?  OK.  Just that alone should have made me re-compose, to either pull out the shot to show that happening in other areas, the relationship to the ground and the temple architecture, and stregthen the relationship between the foes.  Just because they are facing each other in action poses, doesn't mean that the environment can't play a role.

And there's a city in the background, that looks like a pile of square poops.  Oh, and there's ocean and a beach in there too.  That's the problem with trying to fit in a bunch of exercise elements - I failed the piece in the interest of the background elements.  And then over AND under-colored to try to get everything to fit together, when the problems were in the fundamentals of the composition.

Had I only dropped the 'camera' down to ground level, or lifted it to a birds' eye view, I think it would have created a stronger composition with the exact same staging.  OR, I could have just decided to do what I wanted, in any sized framing...and here's what I came up with in literally three minutes: 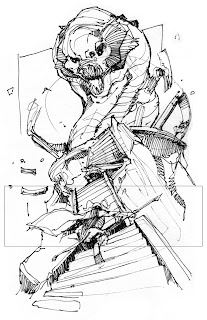 The 'scribble in three minutes' is better than the day and a half painting above.  It's a clearer composition, the lion and monster are connected by the stairs, you can see the columns better, it's a more interesting geographical locations, and it's immensely more dynamic.  Also, if I wanted to add in the city, etc. there's room on the sides, low angled, and wouldn't compete visually with the point of the image- lion vs. monster. 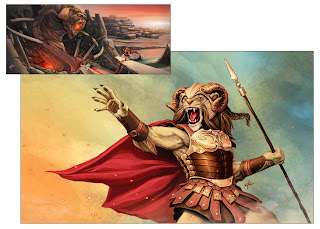 And here is the overall idea, composed as I had originally envisioned it.  But guess what?  No way that's going in the portfolio, when I get time, I'm going to paint out the above sketch - it's way better.

But first, I still need to work on environments, so there's already a new one ready to go later this week.  I needed to achieve something much more naturalistic, than this color abomination.

We're chalking this one up to a learning experience, folks.
Posted by Ken Christiansen at 8:34 AM