Been working on and off on these little guys since last winter.  I started off doing a ton of vehicles for Eric Siebenaler, ( a great love in my life!) who had come in to art direct and design the product, after years on the Transformers team, moved over to the Star Wars team at Hasbro.  After I wrapped up doing a bunch of vehicles for him, I begged him to let me help out with the characters.  He already had some folks going on that while I did the ships, but a month or so later, he found some guys for me to do after all.  And now, I've worked on a ton, I don't even have the count any more.  Either doing view turns based on his front views, or doing guys from scratch under his art direction, it's been many.  I would say a plethora.

Unfortunately, due to the myriad of NDA's and licensing agreements, I can't post any of the art for it.  I will say that when I did beg Eric to throw me some characters, it was not just an email, but a little cartoon based on his defined art style for the line.  It was a sketch of Vader in a pose suggesting Eric would be force choked if he didn't let me draw some guys.  And that is now a Fighter Pod figure, bottom left in the first batch of the page I linked to above!  And so far from the released images, my favorite figure I worked on was the Han in Carbonite - can't wait to get my hands on that one! 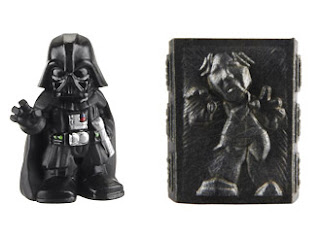 So thanks to Eric for having me help out with this line, and congrats to the ton of people that it takes to make these little guys a reality, I'm really looking forward to going toy shopping in February!
Posted by Ken Christiansen at 9:39 AM