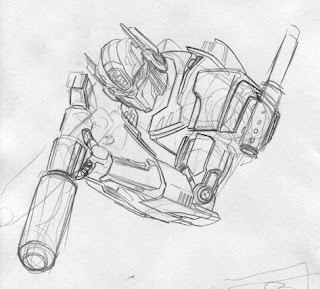 When the time came to do another sketchbook cover, I wanted to take another crack at Prime, both with maybe a more exciting cover image, and something that fit the frame dimensions better.  I created a mock-up of the title and lettering for the sketchbook, and set about sketching a pose that would fit the best in the work area,

I settled on a pretty basic tactical position for Prime, called a Patrol Carry - I wanted him to look like he was ready for action at any time.  After roughing out the basics of the idea, I took it digital. 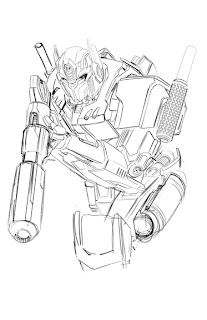 I shifted a few things around, tweaks and tilts here and there, and finally settled on a pretty cools pose that fit the frame well.  Now this is G1 inspired of course, but I put in about twice the usual amount of functionality, gave his chest a bisection to really be able to swing his shoulders a much larger range, and be able to conform to that humanistic weapon handling.  I also tried to keep all the cues intact, but I did move up the gas tanks to the upper leg.  Happy with the drawing, I moved on to colors... 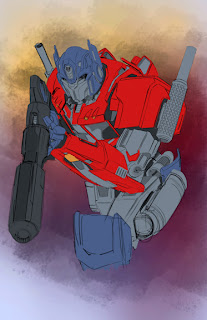 Just flat colors to start with, as usual, and a general background to help the range of colors of the figure. 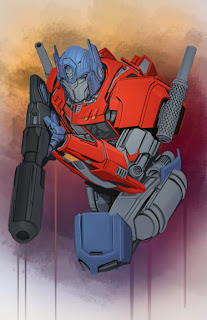 Created another layer, set it to overlay, and picked a light and dark color to build the secondary and tertiary colors. 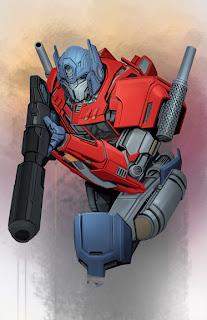 I make some color adjustments to the overall image, along with getting an idea of what I may want to do with the background, and then I begin the detail passes. 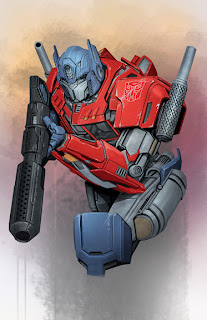 At this point it's pretty much busywork, making pass after pass, adding and sharpening details as I go. 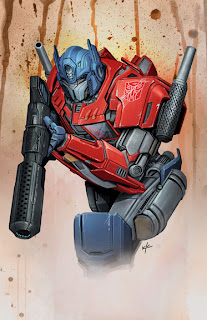 Then I get to the final, making last detail tweaks, and color adjustments, then adding a final shadow/highlight pass.  I scrapped whatever the heck I had going on with that background.  Finally I just grabbed a piece of paper and a jar of ink, and made some spatter and drip patterns, scanned it in and placed it in the frame.  Much better.  Made a smokey fade at the knee, to help blend the figure and background , and called it done.

This is the print version, (available at BotCon, starting this Friday by the way) the sketchbook version is slightly moved up, to allow for the text.

All right, that's the last post until later next week, I'm strapping on my Soundwave Nikes, and heading to Dallas!
Posted by Ken Christiansen at 11:10 AM