So. I was so honored and happy to get the job working on new character designs, that I kind of just took whatever they gave me.  But then I got a brave after a little while, and requested *Soundwave, if he hadn't been taken by someone else yet.

He is my all time favorite Transformer.  I lucked out, and got to take a pass at him.  I got the assignment, and he was to be explored as a secret government FBI/CIA type SUV, in the style of 24, or a Presidential Caravan.  I knew this was coming from his previous incarnation from Animated. 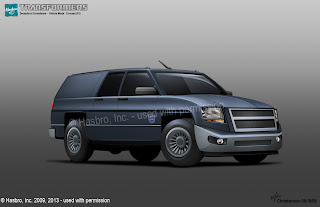 Now that's about as nondescript as you can get, right?  We did explore a little bit of a comm array that would expand when he was transmitting, but it never got fully developed before we moved on to other things. 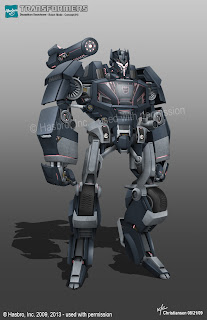 Transformed!  As always, I try to keep as many classic cues in as possible, but there were a few things being asked from Aaron and Eric at Hasbro to try to add, like a movie style head, and there was something with the legs, though in the notes I can't seem to find any reference, probably was in an email that was deleted long ago.

And because we were kind of whipping through these, I never got to do the back versions, but I had the idea the the tires would push back from the shoulders to have some kind of speaker look, with the doors creating an amphitheater type effect on his back.  For maximum bass.

And so that's it for now.  Pre-pre-production conversation starters - and I kind of want to make that point.  This is all first look intended work, in no way meant to be the final vision of anything.  Conversations in the fan forums; that sucks, that's awsome, why didn't we get that, we should have gotten this instead....you're all right. That's the point of the whole endeavor, it's the development process.  Putting something up, that folks can discuss, take in that new information, and try again.  It's concept art, not final design.

I wasn't too excited about the truck mode, but in the growth of development, Soundwave was envisioned as a Drone - and I LOVE that.  I wish I thought of it!  The Transformers Prime Soundwave is second only to my unconditional love of G1 Soundwave.  But, honestly, if they told me to try a Soundwave with a paint can alt mode, I'll try to make it cool!

*And the micro-minions as well, but they weren't ready to deal with those guys at that point.


All right, later this week, up goes the development for the Beast Hunters #4 cover.  And of course, this is still going on: 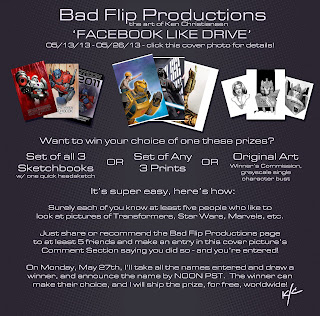 what i like:
- has shoulder weapon and hand canon
- vents below the knee
- colors
- buttons bellow the chest

what i don't like:
- alt mode.. i'd prefer one of those small tanks that has a missile pod on each side, both could possibly transform into his guns and the center of the turret could form the chest for his minions to store. (something like this http://2.bp.blogspot.com/_d8wRazKZMy0/SeP2XYmTX-I/AAAAAAAACbo/AOOnNX_WC9I/s400/manttankstore.jpg )
- skinny legs

what i hate:
- head not very g1-esque
- cars are too small for a robot that was nearly the size of megatron
- those things linking his arms and legs (below the main joint), reminds me of the fallen from the movies, in a bad way.

Hi, I just wanted to clarify something--When you say that this is just concept art, do you mean that it is *NOT* the same art that is in the bible? I didn't take it that way, but someone was telling me that's what you meant. Thanks in advance--it looks really good!

Hugo - can you draw? I'd love for you to take all those suggestions to the next step, and send me a link!

I hate the skinny legs too, I can't remember exactly (like I mentioned in the post) what the directive was, but I think it was an exploration of rendering out the design style from Animated.

Might - It was ALL concept art. At the time I thought I was doing just pre-production on the upcoming series for Hasbro. Now it's being called Aligned Continuity, so I guess it was for that project.

I've never seen the bible, so I don't know if it's in there, or another artist's take on it made the cut. So to me, it was ALL concept art, and some of it got used in the bible.

Six months later, when I was asked to develop the Primes, that was the first time I had heard of the bible, and the 13 Prime designs were commissioned for that bible.

Ken - i draw a bit but not even close to what you do, let's just say that compared to what you did, i'd be an insult to all transformers artists

Hope you didn't take my opinion the wrong way, it was just that, my honest opinion and I could not do better, not by a long shot, i do have ideas, and i'm sure that any fan also has a bunch of them better or worst then mine, all depends on the eyes that see them in paper(or in digital format).
With that said, i'll try to draw something tomorrow after work and send you the link but be warned, my drawing skills are like a an autobot bar full of wheelies, very disturbing!