All right, it took a looooong time to get approval to show some concepts from my work on the Fighter Pods lines, extending out from Star Wars into Ultimate Spider-Man.

So far Wave One has been released, and here some sketches from that round of work. 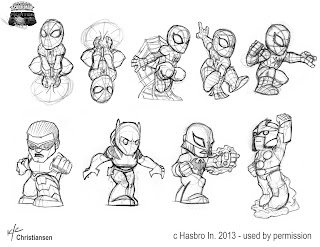 First up are rough pose ideas for the SHIELD gang, Spider-Man, Power Man, White Tiger, Nova, and Iron Fist.  And this is about as far as I went with this line, I usually get to do clean-ups and views, but the turnaround was pretty fast for wave one, and the modelers had a lot of experience from the Star Wars line at this point, so the chain of development was a lot more streamlined. 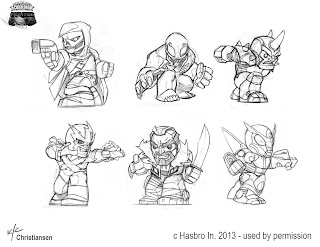 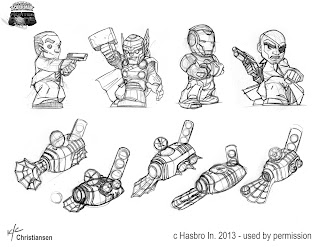 And a few more heroes, Agent Coulson!, Thor, Iron Man, and Nick Fury.  And also the pod shooter concept thumbnails, which kind of all amalgamated into the final retail version.

And that's about it for now on Spider-Man, until whenever another wave comes out.


Next up, some wave 4 Star Wars Fighter Pods...
Posted by Ken Christiansen at 8:48 AM