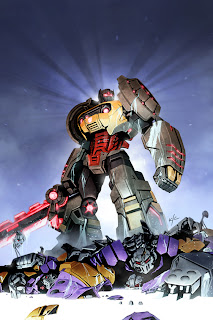 It's a bloodbath, a BLOODBATH!!!  Grimlock has swatted some flies.

This was cover was my idea;  I turned in the #3 cover at the latest deadline I could, due to the cons I attended in the spring, and it was almost time to start the next cover.  Given #3 had a ton of Insecticons, I suggested an aftermath scene, if it fit into the storyline.  My editor (new guy since #3, taking over for John Barber - Mr. Carlos Guzman!) thought it could be pretty cool, and gave me the go ahead. 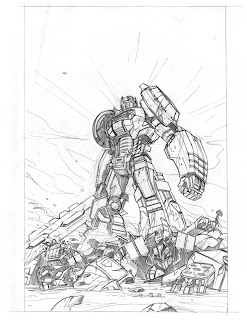 This is the layout drawing for approval to final, and honestly it was just a clean up of the thumbnail I suggested, almost exactly.  I had a pretty clear vision of what I wanted this to look like, so the process went pretty fast. 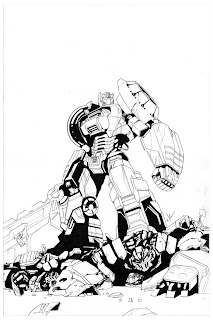 And here is the final line art, tightened up even more from the original thumbnail and layout sketches.

This might be my favorite cover so far, and ever since that Ser-Ket vs. Grimlock fight from Rage #3, I've been wanting to get that bloody energon idea onto a cover!
Posted by Ken Christiansen at 9:12 AM