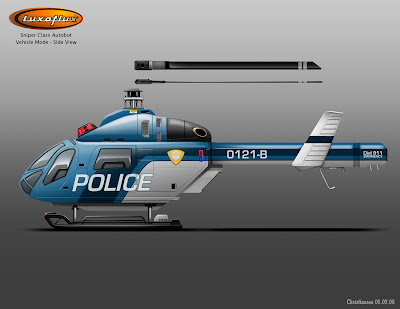 And here is the FIRST vehicle submission for final. Kind of combo of two different helicopters, with a jet propelled stabilizer in the back, instead of the normal blade system, with a police deco.

And as I mentioned previously, the color scheme graduating from a white base on the Scout, to a blue base on the copter. Also, 0121-B is a reference to my wife, it's her birthday...;) 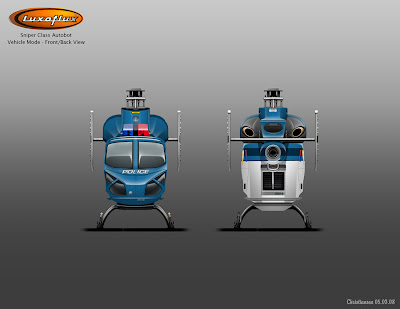 Not to much more to say about this vehicle. I had two previous vehicles already done in this style, so the deco and themes were pretty well established - it was mostly just about designing the body. But this copter was a lot easier to do the turnaround views, with it being a more conventional body shape; the Combaticon Sniper was a lot tougher to match consistent lines/forms in all views. This copter is much more like a car, so in that aspect, it was a lot faster to do.

So I turned in all the Protectobot /Combaticon vehicles, and went on vacation. When I got back...this chopper had to go back to the shop...
Posted by Ken Christiansen at 8:55 AM