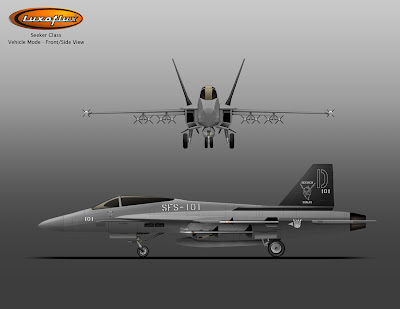 So this is a modified F18 Super Hornet, again slightly changed for legal reasons. I got a lot of graphics done for this guy, creating the Seeker Fighter Squadron, numbered SFS-101 through 103. I'm not sure that really came across in the game. I saw in the cut scene a Navy fighter taking off to fight the Decepts had the SFS on it, not quite what I had in mind. I also took the much loved/hated Kremzeek character, and appropriated him for the Squad Mascot. 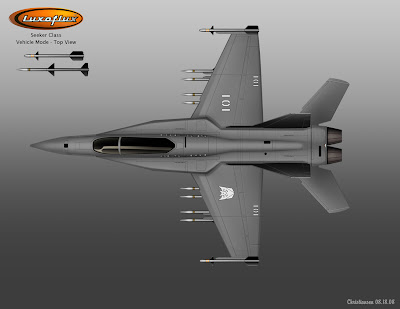 This is where more of the modifications took place, the lines of the body against the wings, tail wing shape, cockpit shape, etc. Enough to get us out of legal trouble, but not enough to keep it from being completely recognizable as the F18. 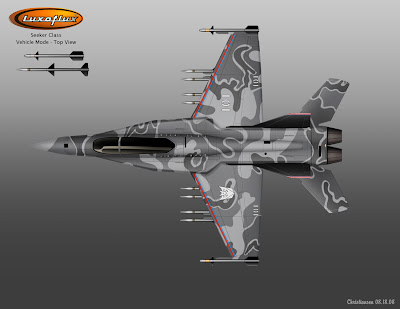 I don't know what happened with the graphics. There was talk of making them camoflauge, so this was a first pass at a Starscream color key. I had purple and black, and blue and black camo patterns set up for Skywarp and Thundercracker, but JT told me to hold off until they figure out what to do. And I never was asked to come back to it and contribute to the colors, so I finally stopped asking about it, and didn't know what to expect until I played the game. I don't know where the red and black comes from, I just know I don't like it. However, the Skywarp version looks great.

Man, I have been hanging to play the game so bad... I bought it about 4 or so weeks ago and I've played it ONCE...

Red and Black, Thrust. Dirge was Blue and Copper, and Ramjet was White with Maroon and Black trim.
I was never a fan of the second set of Seekers myself.

I love what you did with all the designs. I only wish they'd made more of them playable in Multi than they have.