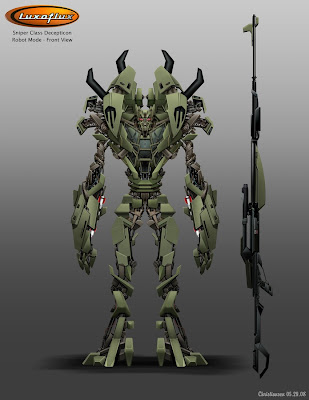 Look out! Sniper! I like this guy a lot. The design came out well, and I also saw it as a bit of a redemption for the last games' Shockwave. I like how Shockwave came out, but through my own fault, I never gave an example of how his canopy could collapse as he moved his torso, and since my time/budget allowed only for full color turnarounds where the character stood straight up, he went into production that way, and appeared in the game very stiff.

So this time I attacked it with gusto. The funny thing is, when I do the block-ins for approval, I just place elements in as fast as I can, just to show where the vehicle cues are going to be, and the general size/shape - and the Luxo boys were right on me, "you gotta break up that canopy a lot more!' Good to know we were on the same page. Canopy = Broken up! 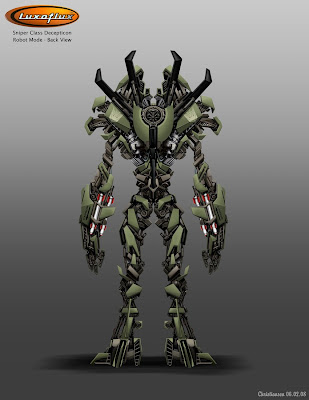 I'm really happy with the back, too. This guy all around is pretty cool, the missiles mounted in his forearm is the best...and I believe it was Luxo's idea the fan out the blades like a deranged peacock.

The characterization in the game came across great, I thought. As I was doing this view, I kept in mind the naked-ed Chamberlain from the Dark Crystal. Slouchy and ev-yil.
Posted by Ken Christiansen at 8:25 AM

Just wanted to leave a comment on at least one of these fantastic posts of yours. I've been drooling over them every morning when I should be starting work.
I just got the game yesterday and I think you did some really great things with these guys, I spent more time trying to unlock all the concept art then actually progressing with the game.
I love the Omnibots in particular, I hope Hasbro does too, the more muscale car robots the better!

Hope to see you back for the next game. :D

I am a big fan of your work and, ironically enough, I was not aware of it on till recently, allow me to elaborate.

I am a die hard Transformers fan and I was not particularly happy with the direction that Transformers has taken (mainly the films) however, if there is one thing that was the diamond in the rough for me it was your amazing designs. I have played both games and love them (especially the new one), despite my disapproval of the films they are based on, your designs however always seem to stand out as the best, much better then what ILM had to offer, you captured core elements of the characters that you redesigned which kept them faithful yet added some wonderful touches to keep them fresh and for that I am extremely grateful. Any chance of seeing your G1 redesigns on an official capacity? They’re masterpieces (I love your Prime and Megatron) perhaps in the new game’s downloadable content

PS: I hope you work with IDW they would be blessed to add you to their already talented group of artists and writers.

Those comments mean a lot to me, I have to say thank you!

Hopefully soon after Comic Con, I'll be able to make a few announcements regarding continuing my TF work with Hasbro and IDW...

So, I gotta say, your art is pretty damn fantastic. The design sense holds up well, even with the Movie-verse's broken apart feel.

I havent had a chance to actually play either of the Transformers movie-based games, but screenshots and video reviews have shown that they have distinctly solid design sense in them.

I, personally, would love to see an ARt Book with your concept art in it.

I look forward to seeing what they get you to do next.

"I, personally, would love to see an ARt Book with your concept art in it."

That would be great, also, could you ask the guys at luxoflux about the possinilty of putting video cycles of the 3d models transforming as unlocakables in the next game? Like that 3d Bumblebee thing that's appeared on the iphones apps store.
I love to see how they actually work. :)

These designs are intense, I must say. I'm also excited to see that you're the same guy who designed the Shockwave from the first game- I absolutely LOVE that design!

That being said, is there an email i can contact you at, or perhaps a photobucket in which some of Shockwave's concept art could be made available? it'd be great to get an in depth look at some of that :D

Check www.badflip.com for the Shockwave concepts.

And you designed all the drones too?! wow man, it must feel awesome to have had at least a few of those made into toys :D That's like a dream come true for most Transfans.

Did they ever say anything bout a Shockwave figure? Doubtful, but hopeful, heh