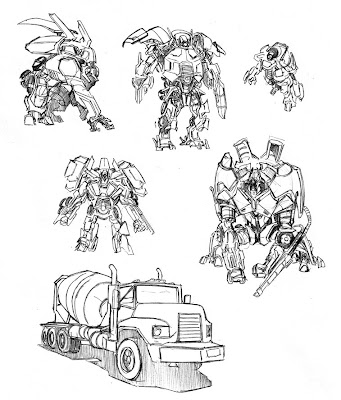 Oh, the mixer drone. Not happy with this one, I really wanted to stretch it out conceptually, and do a gorilla type pose, shorter legs, long arms, and a hunched over back. That top left one is the version I championed, and it really was the only time I got denied an idea. By this time (mid-July 2006) the movie concepts were locked, and ILM had begun building the models, and if I remember correctly, the reason they wanted the upright guy, is because that's what all (relatively) the movie characters were going to be like. I guess that's true, but Bonecrusher and Starscream were stretching that concept a bit. 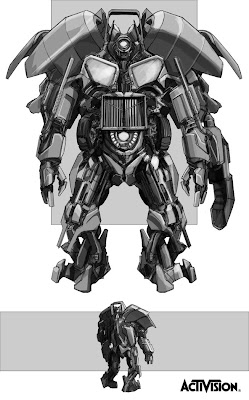 So whatever- I submitted this version for approval, a little boring, but I took advantage and put some Prime vehicle cues in there. I think another issue was that Traveler's Tales didn't want too many additional parts to animate, so I had to scale back the break up of the cement drum, and basically do shoulder pads. 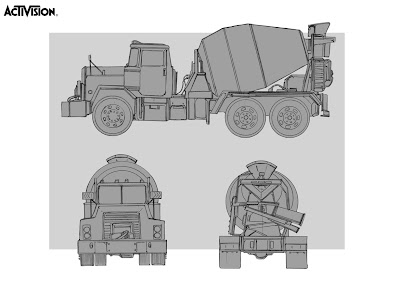 This is an eighties era mixer, I want to say a Mack, but quite a few vehicle parts were changed...pretty sure it's a Mack though. 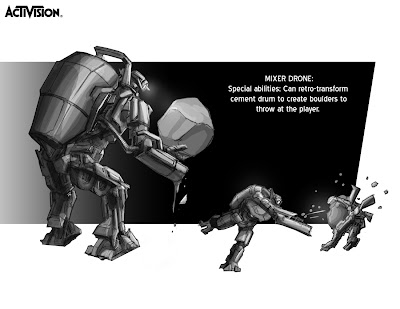 And again, a little character action - not even sure if this concept made it into the game...?
Posted by Ken Christiansen at 7:56 AM