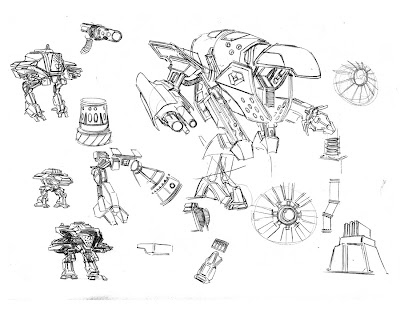 In addition to the transformer drones, there was concern about too much 'human killing' and along with the drones, there weren't enough dynamic enemies on the human side, with jeeps and tanks, etc. So they asked me to come up with a human made drone, based on the technology of the frozen Megatron, reverse engineered like everything else. 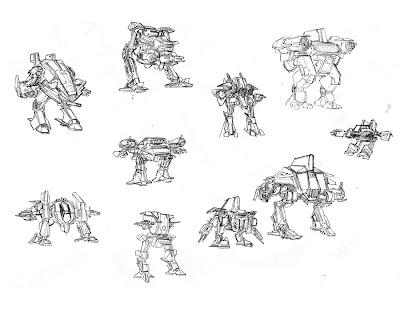 AT-ST meets ED-209 was a directive, made in the likeness of the movie transformers, which final designs were just starting to come in. They wanted gun arms, to simplify animations, but when they talked to Traveler's - they kind of freaked out on the idea due to time, and requested a wheel/tank tread based character, to further reduce animation time. 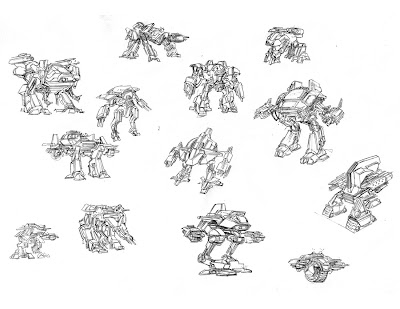 So you can see the last page of ideas here has just a couple roller types, just in the nick of time! Of course, to me, this means something different than 'based' on Cybertronian technology, and just ended up like a human mimic design, but hopefully still cool.

So the favorites got a little tone added, and submitted to Hasbro for approval. Despite the two legged versions, I'm pretty sure it was said that to make the milestone deadline, it needed to be the third guy, with gun emplacements for arms, and tank treads for legs.
Posted by Ken Christiansen at 8:51 AM