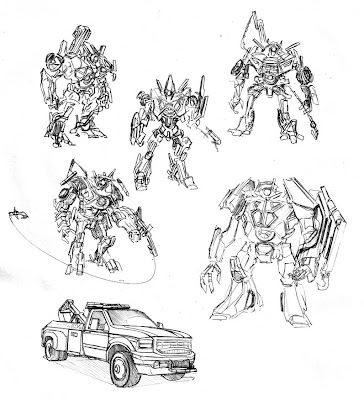 So next up is the Tow Truck drone - I'm not sure of the order anymore, but I was sent a link about the new Hoist figure coming out on Shortpacked.com, based on this guy, sourced from the Alex Kubalsky Transformers Wiki page, who actually engineered the fig. Here's a quote:

"When designing movie Longarm, reference from Activision had not arrived, forcing Kubalsky to make up his own transformation scheme and robot design (which intentionally borrowed some elements from Generation 1 Hoist). By the time reference arrived, it was too late in the process to make any major changes, but Kubalsky was able to graft elements from the game model's chest and arms onto the newly-created design (which he felt worked out rather well). "

He also designed the Swindle figure, so it is he, to whom down I must bow. Say that five times fast. I apologize, I had no idea this guy was going to be a figure, or that there was any hard deadline for getting these designs finalized for the toy creation process. 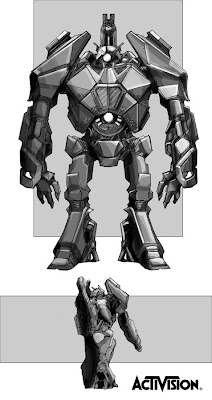 At this point, on my side, I just heard they wanted a tow truck. There was no talk of making it the tow truck that drags Bumblebee around, it was just another vehicle to create a character for. That being said, I originally turned him in with a green paint job, figuring why not? Old fans will at least get the connection...but Hasbro was reluctant to go farther, because at the time, all of this was so new to everyone, games, toys, movie, they kind of wanted to save all the characters for the Bay-verse*...so instead of going all out with yellow cues, and hazard stripes, I just turned in a green one. It's awesome to read that on the other side of the world, that Alex, the toy designer, was pushing for the same thing. 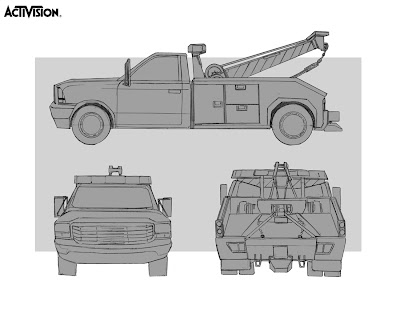 But for the context of the film, it does make more sense to make him the tow truck that Mikaela and Bumblebee drive around with. And I'm not sure if this is even close to the movie truck, all I had was a keyframe that featured Bumblebee firing back as he was being dragged... 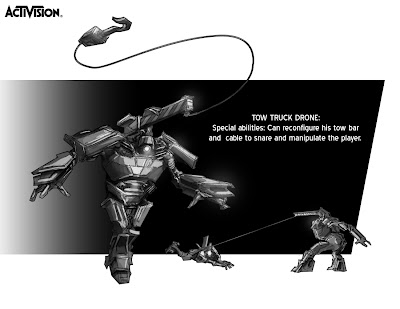 Here's the action feature, kind of a similar function to Bonecrusher's claw from that awesome freeway fight.

*I know people will say after that statement, WTF? You did Shockwave! Wait for the post about it!
Posted by Ken Christiansen at 8:13 AM