Ok, so I did a few quick render images, and now is the time to incorporate what I learned into my usual digital style.  Keeping with the Justice League theme, I did the Flash.  I've always like the costume, but I've spent the last couple of years basically revising and updating old characters for work, so I thought I'd bring a little of that into the piece as well. 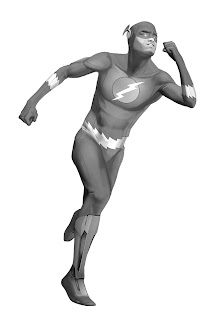 I forgot to save the pencil drawing - it was very rudimentary, just a figure drawing with lines where the costume breaks were going to be.  I rough rendered the body, before going to my usual approach, with defining bits with the Path Tool, etc.  As his costume is mostly body suit, he was ideal to test out the quick render exercises, but afterward I wanted to slightly modernize his suit.  It's mostly identifiable with his boots, but I also added seams, and small vents to emphasize it wasn't just a spandex suit he had on, but something designed to withstand the speed. 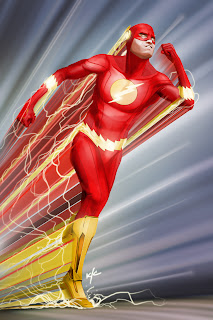 And to further bring out the differences in the suit, I two-toned the reds and the yellows, and of course added the speed effect.

And that's about it.
Posted by Ken Christiansen at 8:49 AM