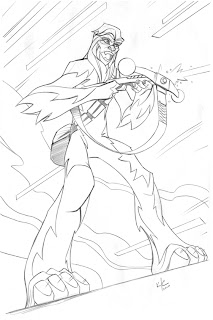 Here's a comission I did a few weeks back - I got a request to do a 11x17" Chewbacca, based on that Hoth version I did for last summer's Chewie Week.

I usually do the animated style drawings at a smaller scale, 8.5x11", but the commission was for somebody who had a collection going at the larger size.  And then I had to figure out what his feet looked like, something I bypassed on the original Hoth image.

I wonder if Boba Fett had real Wookie slippers, to go with his braids...?

Here's the thumbnails, trying to find what the guy had in mind, visually.  I like where that #4 was going, maybe that will show up in the future somewhere, maybe with a Han firing alongside him?
Posted by Ken Christiansen at 8:07 AM