Goals for this year.

I'm probably going to be posting less this year, maybe once or twice a week, but hopefully more quality stuff.  It seems more likely that a lot of what I've done in the last two years I may never be able to publish, so I need to start taking this side work more seriously.

Not that I haven't before, but this blog was set up as a disciple for myself to R&D in the downtime, and that's worked out great - I get some good stuff out of it, but probably I would only use about 1/5 of it for the portfolio, because I view a lot of this stuff as practice and development for the paid work.  Of course there's cross over, but often times I rush these practice pieces just so I have something to post every day.

I've been swamped with work since the beginning of December, and it's still going strong, so I haven't been posting lately, but I do have some things in the works.  Of course, there's leftovers from last year, the big ones being the Oz painting (SO close to being done), the Bounty Hunters painting, and on the board right now, the Eat Your Art Out IV, she-wolf derby destroyers painting.  So that's the painting stuff...

Digitally, I have some images drawn specifically to work on different aspects of Render. 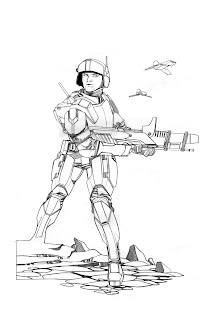 This Space Marine is designed to work on fabric rendering, incorporating other elements like armor and skin.  Rendering robots so much the last few years, I've let my development of doing organic stuff fall by the wayside a bit. 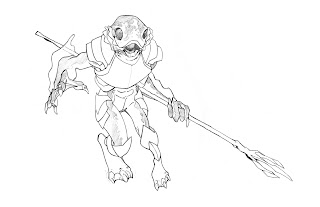 And so this guy is pretty much all organic, pounded metal for the armor, and I want to explore both skin and body rendering, and work on passes for exotic skin texturing, and different styles of reflection - trying to get some skills dealing with super gloss, watery fish skin/scales. 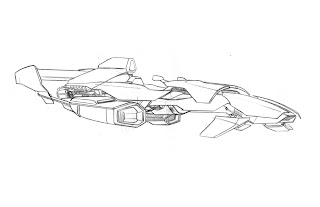 And a vehicle.  While this seems like familiar territory, I'm going to do four or so versions of this speeder, Military, Racer, Police/Rescue, and a Junker version - and really try to cover all types of rendering; graphics, texturing, clear coat paints, fine details, etc.

I have a goal to get better at environments as well, and also work on quick rendering.  I have some ideas for a 'fortress on a cliff' image, and I have some DC busts (2D, of course) images I'm working on for the quick render, that I'll be posting soon as well.