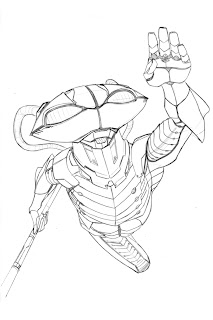 Ever since I did that STAR design, using an homage to Black Manta's helmet, I've kind of had a hankerin' to do a full piece featuring him.  Rarely have I done DC Heroes, so it's possible other than that Ledger Joker, I haven't done a Villian in a very long time....like since high school?  Anyways, there's a nice action figure of him out there that I recently saw, and it re-inspired me to get going on the piece.  And since I was playing a little bit in the DCU, it's a good time to do it.

As per usual, I can't leave well enough alone, and I wanted to update the suit a little bit, retain his classic silhouette, but give him a little more protection that what appears to be a rubber body suit. 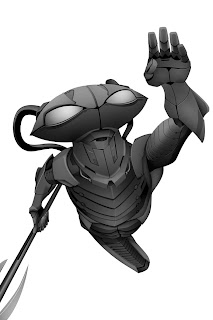 Now that I have the block-in finished and cleaned up, it's time for another detail and shading pass, before color and f/x.  For the background, I'm thinking some sort of dark swirling vortex/whirlpool that he's swimming up out of, coming to get'cha!

Hope to post the final on Friday...
Posted by Ken Christiansen at 7:44 AM