Eat Your Art Out IV

For sure better than Superman IV, and fingers crossed that it will be as good as Star Wars IV : A New Hope.

The theme this year of course, was the 'Dark and Mysterious Origins of Nursery Rhymes.'  And although I would have liked to do a scene of a king and queen getting their heads chopped off, or wandering Black Plague zombies, I decided to go counter-intuitive, and picked Mary Had a Little Lamb, the most innocent and banal, both lyrically and musically, rhyme I could think of, with absolutely no dark origins to speak of.  And then I threw some werewolves in there.  It's called 'This Lamb is Flocked,' and it's on sale this Saturday, at the gallery at Meltdown Comics, in Hollywood, CA. 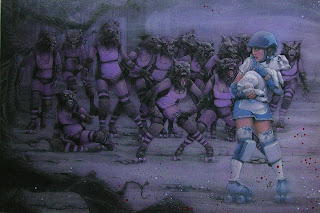 It's kind kind of a big'un, 30" wide, by 20" high, done with acrylic/airbrush and colored pencils.  The photo doesn't quite do it justice, nor does the detail shot: 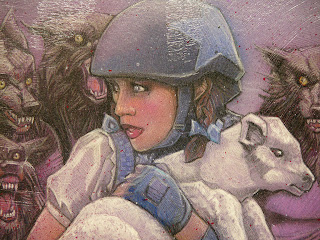 It's kind of somewhere in the middle, lighter than the top image, and darker than the lower image.  So all you pals of mine in the LA area, come on out, as I'm described as a 'Many More' artist, some really amazing artists are involved - it will be a great time had by all.


ANGEL CITY DERBY GIRLS “EAT YOUR ART OUT” RETURNS TO MELTDOWN COMICS WITH A REMARKABLE ROSTER OF ARTISTS FOR THIS ONE-NIGHT ONLY SHOW FEBRUARY 26, 2011
No longer one of LA’s best-kept secrets with over 60 international artists participating this year, Eat Your Art Out has become a “meeting of the minds” in underground art culture.
Los Angeles, CA January 3, 2011– As frosty winter begins to thaw out, Meltdown Comics will once again open its gallery on Saturday February 26, 2011 to curator Carmen “Jane Dope” Acosta for her annual event EAT YOUR ART OUT to benefit Angel City Derby Girls. EAT YOUR ART OUT IV shows the growth of the event and it’s curator. This year over 60 international artists have donated works to be included in a show that always draws a packed house. “It’s rare to have this many artists showing and appearing in one venue,” says curator Jane Dope.
EAT YOUR ART OUT was born four years ago when artist, part-time underground curator and skater for the Angel City Derby Girls, Jane Dope, needed to raise funds to support a struggling Women’s Flat Track Roller Derby League. Jane Dope took her passion for skating to her friends and family in LA’s subversive art scene. By February 2008 the idea came to fruition and a cool happening was hatched to raise funds and awareness for community-based Roller Derby leagues. In 2009 the event grew exponentially with more artists jumping on board. By 2010 word spread and EAT YOUR ART OUT was solidified as a “must do” event for artists, even having to start turning away donations from artists because of the limited amount of space. Understanding she was a bridge between artist and art enthusiast, Jane Dope reached even further for 2011 to fortify her vision as a show for the most impressive works by relevant artists today, yet still affordable enough to get the art in the hands of the culture that fostered many of these artists from their early stages of their careers.
The basis of what makes EAT YOUR ART OUT so unique is the impressive All-Star line-up that donates one of a kind works of art (and most often also make an appearance). The artists who have donated art for February 2011 include, Jim Mahfood AKA FOOD ONE, Jason Shawn Alexander, Dave Crosland, Michael C. Hsuing, Jeffrey Shagawat aka Bill Shag, Mike Huddleston, Apricot Mantle, Brooke Kent, Dave MacDowell, Luke Wessman, Brian Ewing, Jessica Ward, Nolan Tredway and many more.
All pieces have a minimum bid price, but are usually much less than gallery prices.
ACDG’s goal is to raise enough money to have a permanent home to hold roller derby bouts and events for the community. All proceeds go to support the league, which is independently run by the skaters for the skaters.
The event is open to the public and will feature gourmet food trucks, free drinks and music! This year the brilliant DJ Day, DJ Expo and DJ Mahf will be doing a live set throughout the entire evening. Lucky winners walk away with very unique prizes. And everyone walks away from a memorable evening filled with great music, free beer, hot girls in rollers skates and above all, a chance to view incredible art.

Posted by Ken Christiansen at 8:54 AM

i can't WAIT to see this in person