I wanted to do a quick series of rough renders, taking around 2 hours or so, to just practice painting forms.  A lot of artists out there start from a black shape, and build out within that.  It's not a direction I use too much - I'm still starting from a drawing for the most part - but I thought I'd give it a go. 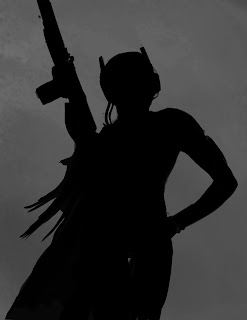 This is just a quick form paint out.  I had just the body, but then I wanted to fill the frame a little bit more, so I added in a cape shape. 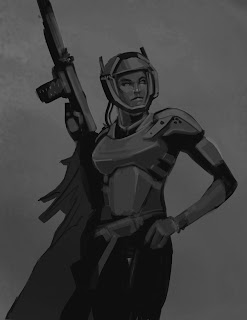 Then I just used a brush with white tones at low opacity to block in some shapes, then going back with tone picks to generate the shading values. 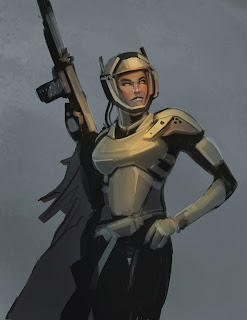 Before going any further, I brought color into the equation, so I could start color picking from there, for the second detail pass. 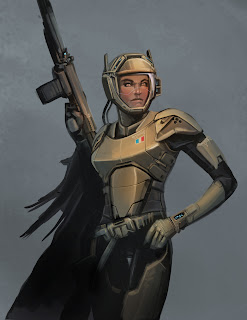 Here's another detail pass, along with some tweaking; adjusting her head, doing a bit more work on the shoulder armor, etc. 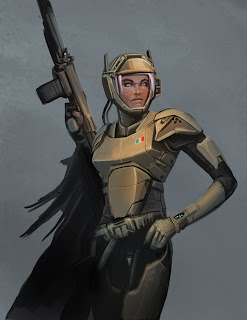 Here's where I stopped, I ran out of time...I was readjusting some of the armor bit, making the belly plate a little more form fitting and centered better.  Also I was dinking around with the breast plate to see if something better could be done.

So that's that. But you can see the potential to develop this image further, or just cherry pick the best elements for another pass at the same character.  If I was moving on with this one, I'd keep the overall armor to bodysuit coverage, the chest armor buckles, and refine the helmet - dumping the rest and moving on.
Posted by Ken Christiansen at 8:53 AM