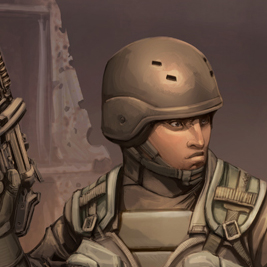 SEAL.  This one is a full body concept, with a background/setting.  I like how it turned out, but it made me laugh at myself as it dawned on me that I performed essentially the same exercise as the previous combat crew rough renders.  The original goal was to take the rough render tricks, along with the other past render techniques and combine that into a more substantial image, but I added so many more elements like a additional guns, and a background, that I essentially spent around the same amount of time per element.  The time limit on this was 6-8 hours, given the tech details in the weaponry, etc.  All right, let's get to the step by step. 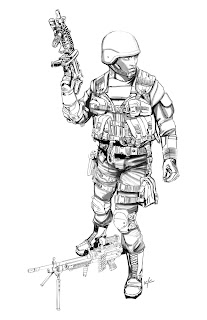 I still have the most success working from a drawing, so that's how I started, a rough sketch out, with a tighter detail drawing over top. 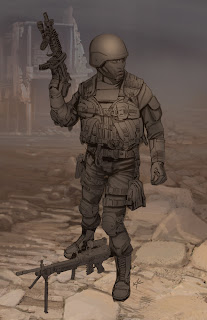 I then dropped in a background.  I used rock elements from some photos I took at Vasquez Rocks (or AKA, the Captain Kirk Rocks, which is about a fifteen minute drive from my house) and did a paint over on that to define the colors and  also dropped in a bombed out structure, inspired from that apartment in that sniper scene from Private Ryan.  And using the techniques I worked on from the Mushroom of Doom image.  So with the background colors defined, I filled the soldier drawing, and began to render it out. 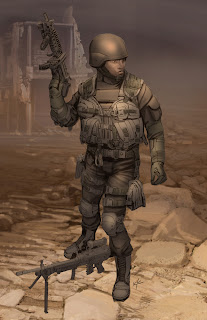 Again, I use an overly layer to give a highlight overview, and help separate materials with different tones and colors, still being fairly broad about the overall color detailing. Now this is where I really go in, and redefine the drawing by rendering out with colors.  And again, using higher color opacity and smaller brushes with each pass.  I also boosted the contrast and saturation of the background, making adjustments here and there. 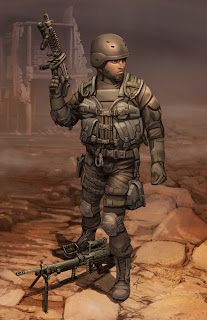 And here's the final.  Everything is well defined, albeit not pristine, but every element is pretty clear as to what it's supposed to represent.  Somewhere along the way, I had made some structural adjustments around to pack, color picks and highlights, etc., and called it done.  Or did I? 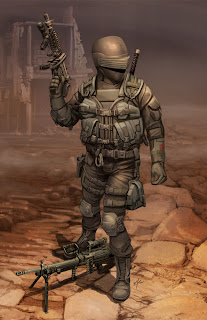 How could I resist?  After it was all done, it was practically him wasn't it?  So I took an additional 30-ish minutes, and gave him a new head and added in some other easter eggs.

Can't wait for that new movie!
Posted by Ken Christiansen at 8:45 AM

I think you do a great job. Just stumbled across this blog and couldn't stop strolling down to look at your work. But I am afraid, my sleeping pills have kicked in and sleep devours me. Thank you for creating brilliant pieces of work. It was a growing pleasure.:-)