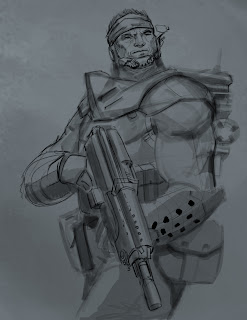 OK, back to drawing.  Yes I will use the build from black technique, but I still like to draw stuff out first.  The anatomy was a little screwy with the Intelligence Officer, so I wanted to see it and adjust it as I sketched it out. 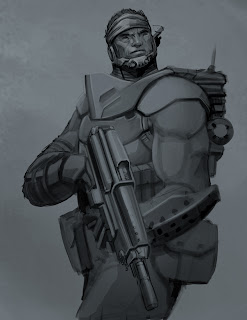 So here is just a bit of cleanup, but more about the value fill to get it ready for some color... 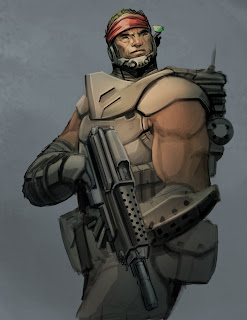 So this is just a quick color fill to get the process started with the color render, then... 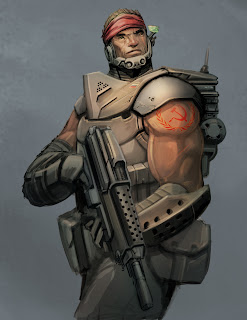 I do a second color pass, set at an overlay layer, then merge it all together.  Then I just pick colors, and as usually increase color opacity and decrease brush size as I add in details.  And then I ran out of time.  Boom.

If you caught it on the intelligence officer, I gave her a French badge, this guy - he's from Russia, and still holds on to some of that Soviet era self identification.

Unlike the I/O, I like just about every element in this guy, but it all needs to get developed further.  But in terms of a quick idea, I think he succeeds in planting the seeds of a cool character design.
Posted by Ken Christiansen at 8:24 AM