Been on a movie kick lately, watching that first series of Batman movies, starting with Burton's '89 film, and revisiting the Batman Animated Series as well.

But that is just in anticipation of going to see Dark Knight Rises - I'm really all about Superman '78, getting a comp together for the next epic, which will be themed Superman I - II, the two-parter that was originally intended to be one giant film.

But I got bats in the brain, so I'm doing a little World's Finest (Movie Style), to ease into practicing likenesses for Christopher Reeves - but first, here's a little Michael Keaton: 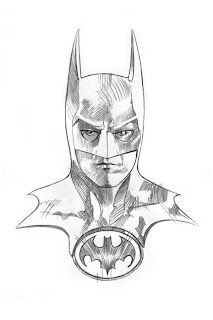 And then on to the real subject.  Probably the first time I drew what was meant to be a movie Superman since the early eighties: 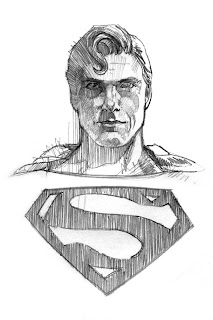 Still needs a little practice, good thing I have a lot of pencils...

On Friday, a two-shot of the Movie World's Finest.
Posted by Ken Christiansen at 8:48 AM