OK, here's some contributions to Wave 3!  This will be a single post, as Wave 3 seems to be a little lighter in the 'new' department.  Got enough hologram figures?  Me too.  Though there are some that I love, like the blue hologram Leia - that's just about perfect.

OK, on to the show, let's start off with pilots, shall we?

Action Pilot Luke, sans helmet.  And I tell you what, that looks to be a Hoth flight suit in the drawing, so maybe he'll come around again with the right paint job.  Which, for you non-Hyper Star Wars Nerds, that's a light gray color to the boots and gloves. 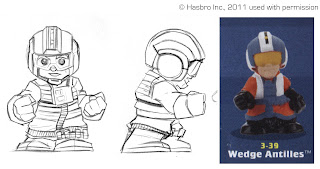 Mr. Wedge Antilles - For whatever reason, I was assigned a whole batch of pilots - I have no idea why, before all else, did Porkins get the first release.  No matter, now the gang is all here...

Biggs - Apparently the coolest guy around.  Until Luke meets Han, and is shown what cool really is, outside of Podunksville.  And then he dies. 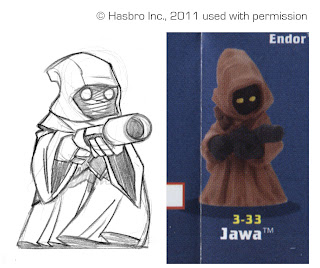 Jawa with Zapper - And that's all the it - there's around 20 or so characters that I just had time to break the pose and kind of clean it up.  Here's one of them, hunting R2 units on the sands of Tatooine. 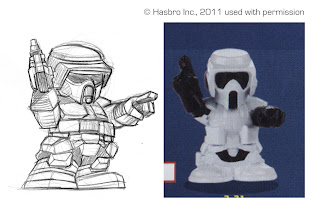 Biker Scout - in a 'KILL THAT EWOK...NO, THE OTHER EWOK' pose.  Another one shot design.

Super Battle Droid - Some poses for essentially the same model.  Not really sure on what happened, the product seems to have lost a little bit of the style.  This may have been a revise on my part though, and the team went with the original design. 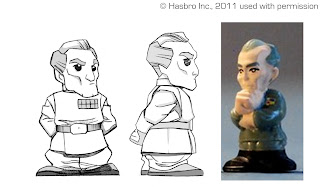 Grand Moff Tarkin - every kid's favorite character.  But as an adult nerd it's pretty awesome the have action figures of this character.  He was from Wave 2 by the way - and I much prefer Eric Siebenaler's contemplation re-pose.

Yoda - Another one from a previous wave I forgot I worked on.  I think I was so excited about the poses we were able to pull off for Wave 4, I forgot about this classically posed Yoda.  Get that flight suit Luke repainted, and kids can recreate the scene on Dagobah, where Luke threatens Yoda with a such a crude weapon as a blaster! 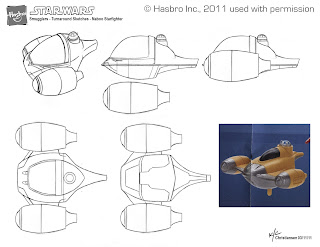 Naboo Starfighter - they never just seem fat enough, do they?  I like the cute factor in the drawings better, but the product is probably a little more accurate to the film version, and the Fighter Pod style.  This was one of the first assignments I had for Fighter Pods.

All right, that's Wave 3 from me on Fighter Pods!
Posted by Ken Christiansen at 9:19 AM

Thanks, that's very nice to say. Well, I'm surprised they come out as nice as they do. The resin prototypes for tooling look a lot sharper, I think it's the best they can do with the production material.